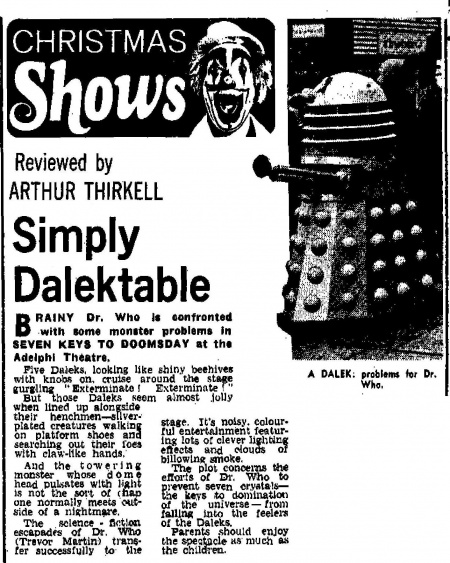 BRAINY Dr. Who is confronted with some monster problems in SEVEN KEYS TO DOOMSDAY at the Adeiphi Theatre.

Five Daleks, looking like shiny beehives with knobs on. cruise around the stage gurgling "Exterminate ! Exterminate !"

But those Daleks seem almost jolly when lined up alongside their henchmen--silver-plated creatures walking on platform shoes and searching out their foes with claw-like hands.

And the towering monster whose dome head pupates with light is not the sort of (hap one normally meets outside of a nightmare.

The science - fiction escapades of Dr. Who (Trevor Martin) transfer successfully to the stage. It's noisy. colourful entertainment featuring lots of clever lighting effects and clouds of billowing smoke.

The plot concerns the efforts of Dr, Who to prevent seven crystals—the keys to domination of the universe— from falling into the feelers of the Daleks.

Parents should enjoy the spectacle as much as the children.

Caption: A DALEK: problems for Dr. Who.