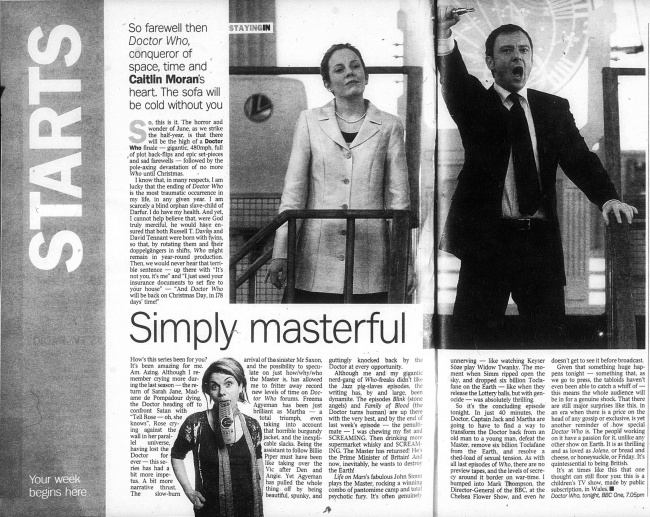 So farewell then Doctor Who, conqueror of space, time and Caitlin Moran's heart. The sofa will be cold without you

So, this is it. The horror and wonder of June, as we strike the half-year, is that there will be the high of a Doctor Who finale — gigantic, 480mph, full of plot back-flips and epic set-pieces and sad farewells — followed by the pole-axing devastation of no more Who until Christmas.

I know that, in many respects, I am lucky that the ending of Doctor Who is the most traumatic occurrence in my life, in any given year. I am scarcely a blind orphan slave-child of Darfur. I do have my health. And yet, I cannot help believe that, were God truly merciful, he would have ensured that both Russell T. Davies and David Tennant were born with twins, so that, by rotating them and their doppelgangers in shifts, Who might remain in year-round production. Then, we would never hear that terrible sentence — up there with "It's not you, it's me" and "I just used your insurance documents to set fire to your house" — "And Doctor Who will be back on Christmas Day, in 178 days' time!"

How's this series been for you? It's been amazing for me. Am. Azing. Although I remember crying more during the last season — the return of Sarah Jane, Madame de Pompadour dying, the Doctor heading off to confront Satan with "Tell Rose — oh, she knows", Rose crying against the wall in her parallel universe, having lost the Doctor for ever — this series has had a bit more impetus. A bit more narrative thrust.

The slow-bum arrival of the sinister Mr Saxon, and the possibility to speculate on just how/why/who the Master is, has allowed me to fritter away record new levels of time on Doctor Who forums. Freema Agyeman has been just brilliant as Martha — a total triumph, even taking into account that horrible burgundy jacket, and the inexplicable slacks. Being the assistant to follow Billie Piper must have been like taking over the Vic after Den and Angie. Yet Agyeman has pulled the whole thing off by being beautiful, spunky, and guttingly knocked back by the Doctor at every opportunity.

Although me and my gigantic nerd-gang of Who-freaks didn't like the Jazz pig-slaves episodes, the writing has, by and large, been dynamite. The episodes Blink (stone angels) and Family of Blood (the Doctor turns human) are up there with the very best, and by the end of last week's episode — the penultimate — I was chewing my fist and SCREAMING. Then drinking more supermarket whisky and SCREAMING. The Master has returned! He's the Prime Minister of Britain! And now, inevitably, he wants to destroy the Earth!

Life on Mars's fabulous John Simm plays the Master, rocking a winning combo of pantomime camp and total psychotic fury. It's often genuinely unnerving — like watching Keyser Söze play Widow Twanky. The moment when Simm ripped open the sky, and dropped six billion Toclafane on the Earth — like when they release the Lottery balls, but with genocide — was absolutely thrilling.

So it's the concluding episode tonight. In just 40 minutes, the Doctor, Captain Jack and Martha are going to have to find a way to transform the Doctor back from an old man to a young man, defeat the Master, remove six billion Toclafane from the Earth. and resolve a shed-load of sexual tension. As with all last episodes of Who, there are no preview tapes, and the levels of secrecy around it border on war-time. I bumped into Mark Thompson, the Director-General of the BBC. at the Chelsea Flower Show, and even he doesn't get to see it before broadcast. Given that something huge happens tonight — something that, as we go to press, the tabloids haven't even been able to catch a whiff of —this means the whole audience will be in for a genuine shock. That there are still major surprises like this, in an era when there is a price on the head of any gossip or exclusive, is yet another reminder of how special Doctor Who is. The people working on it have a passion for it, unlike any other show on Earth. It is as thrilling and as loved as Jolene, or bread and cheese, or honeysuckle, or Friday. It's quintessential to being British.

It's at times like this that one thought can still floor you: this is a children's TV show, made by public subscription, in Wales.