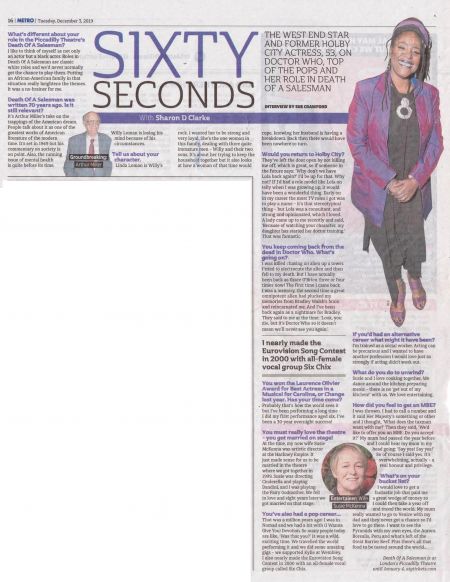 THE WEST END STAR AND FORMER HOLBY CITY ACTRESS, 53, ON DOCTOR WHO, TOP OF THE POPS AND HER ROLE 1N DEATH OF A SALESMAN

What's different about your role in the Piccadilly Theatre's Death Of A Salesman?

I like to think of myself as not only an actor but a black actor. Roles in Death Of A Salesman are classic white roles and we'd never normally get the chance to play them. Putting an African-American family in that situation really heightens the themes. It was a no-brainer for me.

Death Of A Salesman was written 70 years ago. is it still relevant?

It's Arthur Miller's take on the trappings of the American dream. People talk about it as one of the greatest works of American literature of the modern time. It's set in 1949 but his commentary on society is on point. Also, the running issue of mental health is quite before its time.

Willy Loman is losing his mind because of his circumstances.

Tell us about your character.

Linda Loman is Willy's rock. I wanted her to be strong and very loyal. She's the one woman in this family, dealing with three quite immature men - Willy and their two sons. It's about her trying to keep the household together but it also looks at how a woman of that time would cope, knowing her husband is having a breakdown. Back then there would have been nowhere to turn.

Would you return to Holby City?

They've left the door open by not killing me off, which is great, so if someone in the future says: 'Why don't we have Lola back again?' I'd be up for that. Why not? If I'd had a role model like Lola on telly when I was growing up, it would have been a wonderful thing. Early on in my career the most TV roles I got was to play a nurse - it's that stereotypical thing - but Lola was a consultant, and strong and opinionated, which I loved. A lady came up to me recently and said, 'Because of watching your character, my daughter has started her doctor training.' That was fantastic.

You keep coming back from the dead in Doctor Who. What's going on?

I was killed chasing an alien up a tower. I tried to electrocute the alien and then fell to my death. But I have actually been back as Grace O'Brien three or four times now! The first time I came back I was a memory, the second time a great omnipotent alien had plucked my memories from Bradley Walsh's brain and reincarnated me. And I've been back again as a nightmare for Bradley. They said to me at the time: 'Look, you die, but it's Doctor Who so it doesn't mean we'll never see you again.'

You won the Laurence Olivier Award for Best Actress in a Musical for Caroline, or Change last year. Has your time come?

Probably that's how the world sees it but I've been performing a long time I did my first performance aged six. I've been a 30-year overnight success!

You must really love the theatre - you got married on stage!

At the time, my now wife Susie McKenna was artistic director at the Hackney Empire. It just made sense for us to be married in the theatre where we got together in 1999. Susie was directing Cinderella and playing Dandini, and I was playing the Fairy Godmother. We fell in love and eight years later we got married on that stage.

You've also had a pop career...

That was a million years ago! I was in Nomad and we had a hit with (1Wanna Give You) Devotion. So many people today are like, 'Was that you?' It was a wild, exciting time. We travelled the world performing it and we did some amazing gigs - we supported Kylie at Wembley. I also nearly made the Eurovision Song Contest in 2000 with an all-female vocal group called Six Chix.

lf you'd had an alternative career what might it have been?

I'm trained as a social worker. Acting can be precarious and I wanted to have another profession I would love just as strongly if acting didn't work out.

What do you do to unwind?

Susie and I love cooking together. We dance around the kitchen preparing meals - there is no 'get out of my kitchen!' with us. We love entertaining.

How did you feel to get an MBE?

I was thrown. I had to call a number and it said Her Majesty's something or other and I thought, 'What does the taxman want with me?' Then they said, 'We'd like to offer you an MBE. Do you accept it?' My mum had passed the year before and I could hear my mum in my head going: 'Say yes! Say yes!' So of course I said yes. It's overwhelming, actually - a real honour and privilege.

I would love to get a fantastic job that paid me a great wodge of money so I could then take a year off and travel the world. My mum really wanted to go to Venice with my dad and they never got a chance so I'd love to go there. I want to see the Pyramids with my own eyes, the Aurora Borealis, Peru and what's left of the Great Barrier Reef. Plus there's all that food to be tasted around the world...

Death Of A Salesman is at London's Piccadilly Theatre until January 4, atgtickets.com