So, the story we've all been waiting for 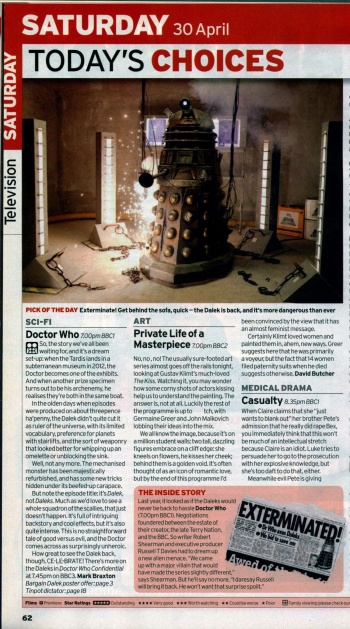 So, the story we've all been waiting for, and it's a dream set-up: when the Tardis lands in a subterranean museum in 2012, the Doctor becomes one of the exhibits. And when another prize specimen turns out to be his archenemy, he realises they're both in the same boat.

In the olden days when episodes were produced on about threepence ha'penny, the Dalek didn't quite cut it as ruler of the universe, with its limited vocabulary, preference for planets with stairlifts, and the sort of weaponry that looked better for whipping up an omelette or unblocking the sink.

Well, not any more. The mechanised monster has been majestically refurbished, and has some new tricks hidden under its beefed-up carapace.

But note the episode title: it's Dalek, not Daleks. Much as we'd love to see a whole squadron of the scallies, that just doesn't happen. It's full of intriguing backstory and cool effects, but it's also quite intense. This is no straightforward tale of good versus evil, and the Doctor comes across as surprisingly unheroic.

How great to see the Dalek back, though. CE-LE-BRATE! There's more on the Daleks in Doctor Who Confidential at 7.45pm on BBC3. Bargain Dalek poster offer: page 3 Tinpot dictator: page 18

Caption: PICK OF THE DAY Exterminate! Get behind the sofa, quick —the Dalek is back, and it's more dangerous than ever

Last year, it looked as if the Daleks would never be back to hassle Doctor Who (7.00pm BBC1). Negotiations foundered between the estate of their creator, the late Terry Nation, and the BBC. So writer Robert Shearman and executive producer Russell T Davies had to dream up a new alien menace. "We came up with a major villain that would have made the series slightly different," says Shearman. But he'll say no more. "I daresay Russell will bring it back. He won't want that surprise spoilt."