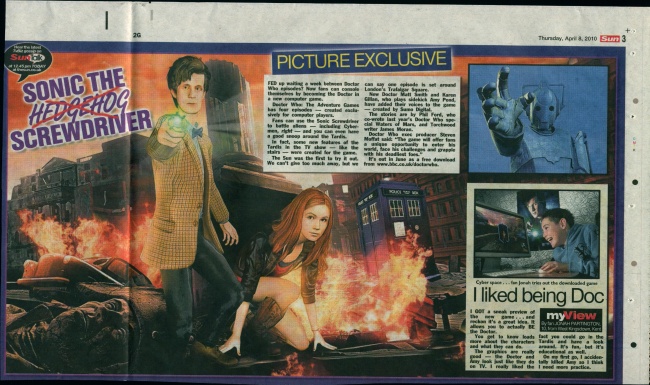 FED up waiting a week between Doctor Who episodes? Now fans can console themselves by becoming the Doctor in a new computer game.

Doctor Who: The Adventure Games has four episodes — created exclusively for computer players.

Fans can use the Sonic Screwdriver to battle aliens — including Cyber-men, right — and you can even have a good snoop around the Tardis.

In fact, some new features of the Tardis in the TV show — like the stairs — were created for the game.

The Sun was the first to try it out. We can't give too much away, but we can say one episode is set around London's Trafalgar Square.

New Doctor Matt Smith and Karen Gillan, who plays sidekick Amy Pond, have added their voices to the game — created by Sumo Digital.

The stories are by Phil Ford, who co-wrote last year's Doctor Who special Waters of Mars, and Torchwood writer James Moran.

Doctor Who exec producer Steven Moffat said: "The game will offer fans a unique opportunity to enter his world, face his challenges and grapple with his deadliest foes."

It's out in June as a free download from www.bbc.co.uk/doctorwho.

I liked being Doc

I GOT a sneak preview of the new game ... and reckon it's a great idea. It allows you to actually BE the Doctor.

You get to know loads more about the characters and what they can do.

The graphics are really good — the Doctor and Amy look just like they do on TV. I really liked the fact you could go in the Tardis and have a look around. It's fun, but it's educational as well.

On my first go, I accidentally killed Amy so I think I need more practice.