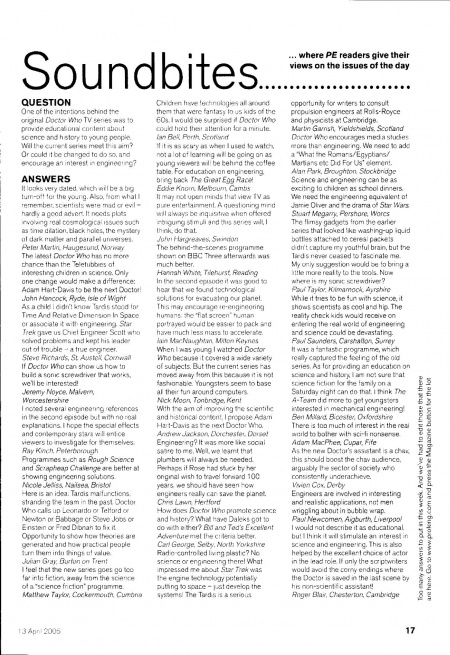 ... where PE readers give their views on the issues of the day

One of the intentions behind the original Doctor Who TV series was to provide educational content about science and history to young people. Will the current series meet this aim? Or could it be changed to do so, and encourage an interest in engineering?

It looks very dated, which will be a big turn-off for the young. Also, from what I remember, scientists were mad or evil — hardly a good advert. It needs plots involving real cosmological issues such as time dilation, black holes, the mystery of dark matter and parallel universes. Peter Martin, Haugesund, Norway The latest Doctor Who has no more chance than the Teletubbies of interesting children in science. Only one change would make a difference: Adam Hart-Davis to be the next Doctorl John Hancock, Ryde, isle of Wight As a child I didn't know Tardis stood for Time And Relative Dimension In Space or associate it with engineering. Star Trek gave us Chief Engineer Scott who solved problems and kept his leader out of trouble a true engineer. Steve Richards, St, Austell. Cornwall If Doctor Who can show us how to build a sonic screwdriver that works, we'll be interested!

I noted several engineering references in the second episode but with no real explanations. I hope the special effects and contemporary stars will entice viewers to investigate for themselves. Ray Kinch, Peterborough

Programmes such as Rough Science and Scrapheap Challenge are better at showing engineering solutions.

Here is an idea. Tardis malfunctions, stranding the team in the past. Doctor Who calls up Leonardo or Telford or Newton or Babbage or Steve Jobs or Einstein or Fred Dibnah to fix it. Opportunity to show how theories are generated and how practical people turn them into things of value.

I feel that the new series goes go too far into fiction, away from the science of a "science fiction" programme. Matthew Taylor, Cockermouth, Cumbria

Children have technologies all around them that were fantasy to us kids of the 60s. I would be surprised if Doctor Who could hold their attention for a minute. lan Bell, Perth, Scotland if it is as scary as when I used to watch, not a lot of learning will be going on as young viewers will be behind the coffee table. For education on engineering, bring back The Great Egg Race! Eddie Knorn, Melboum, Combs It may not open minds that view TV as pure entertainment. A questioning mind will always he inquisitive when offered intriguing stimuli and this series will, think, do that.

The behind-the-scenes programme shown on BBC Three afterwards was much better.

Hannah White, Tilehurst, Reading In the second episode it was good to hear that we found technological solutions for evacuating our planet. This may encourage re-engineering humans: the "flat screen" human portrayed would be easier to pack and have much less mass to accelerate. Iain MacNaughtan, Milton Keynes

When I was young I watched Doctor Who because it covered a wide variety of subjects. But the current series has moved away from this because it is not fashionable. Youngsters seem to base all their fun around computers. Nick Moon, Tonbridge, Kent

With the aim of improving the scientific and historical content, I propose Adam Hart-Davis as the next Doctor Who. Andrew Jackson, Dorchester, Dorset Engineering? It was more like social satire to me. Well, we learnt that plumbers will always be needed. Perhaps if Rose had stuck by her original wish to travel forward 100 years, we should have seen how engineers really can save the planet, Chris Lawn, Hertford

How does Doctor Who promote science and history? What have Daleks got to do with either? Bill and Ted's Excellent Adventure met the criteria better. Carl George, Selby, North Yorkshire Radio-controlled living plastic? No science or engineering there! What impressed me about Star Trek was the engine technology potentially putting to space — just develop the systemsl The Tardis is a serious

opportunity for writers to consult propulsion engineers at Rolls-Royce and physicists at Cambridge.

Martin Garrish, Yieldshields, Scotland Doctor Who encourages media studies more than engineering. We need to add a "What the Romans/Egyptians/ Martians etc Did For Us" element. Alan Park, Broughton, Stockbridge Science and engineering can be as exciting to children as school dinners. We need the engineering equivalent of Jamie Oliver and the drama of Star Wars. Stuart Megarry, Pershore, Worcs The flimsy gadgets from the earlier series that looked like washing-up liquid bottles attached to cereal packets didn't capture my youthful brain, but the Tardis never ceased to fascinate me. My only suggestion would be to bring a little more reality to the tools. Now where is my sonic screwdriver?

Paul Taylor, Kilmarnock, Ayrshire While it tries to be fun with science, it shows scientists as cool and hip. The reality check kids would receive on entering the real world of engineering and science could be devastating. Paul Saunders, Carshalton, Surrey It was a fantastic programme, which really captured the feeling of the old series. As for providing an education on science and history, I am not sure that science fiction for the family on a Saturday night can do that. I think The A-Team did more to get youngsters interested in mechanical engineering! Ben Millard, Bicester, Oxfordshire There is too much of interest in the real world to bother with sci-fi nonsense. Adam MacPhee, Cupar, Fife

As the new Doctor's assistant is a chav, this should boost the chav audience, arguably the sector of society who consistently underachieve.

Engineers are involved in interesting and realistic applications, not men wriggling about in bubble wrap, Paul Newcomen, Aigburth, Liverpool I would not describe it as educational, but I think it will stimulate an interest in science and engineering. This is also helped by the excellent choice of actor in the lead role. If only the scriptwriters would avoid the corny endings where the Doctor is saved in the last scene by his non-scientific assistant!