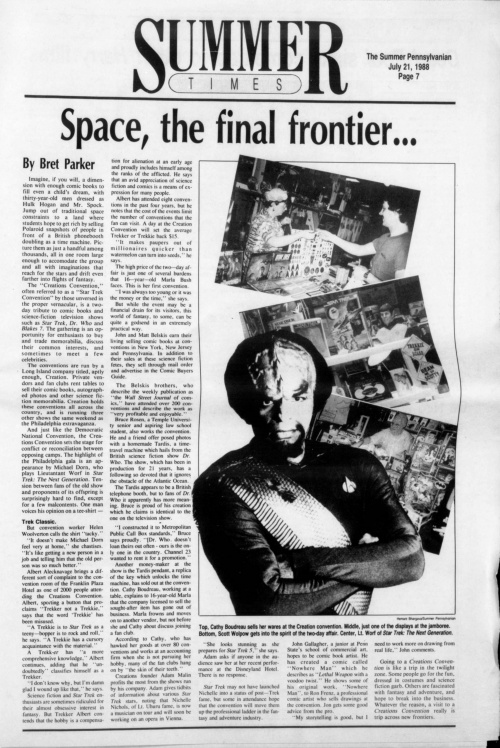 Imagine, if you will, a dimension with enough comic books to fill even a child's dream, with thirty-year-old men dressed as Hulk Hogan and Mr. Spock. Jump out of traditional space constraints to a land where students hope to get rich by selling Polaroid snapshots of people in front of a British phonebooth doubling as a time machine. Picture them as just a handful among thousands, all in one room large enough to accomodate the group and all with imaginations that reach for the stars and drift even farther into flights of fantasy.

The "Creations Convention," often referred to as a "Star Trek Convention" by those unversed in the proper vernacular, is a two-day tribute to comic books and science-fiction television shows such as Star Trek, Dr. Who and Blakes 7. The gathering is an opportunity for enthusiasts to buy and trade memorabilia, discuss their common interests, and sometimes to meet a few celebrities.

The conventions are run by a Long Island company titled, aptly enough, Creation. Private vendors and fan clubs rent tables to sell their comic books, autographed photos and other science fiction memorabilia. Creation holds these conventions all across the country, and is running three other shows the same weekend as the Philadelphia extravaganza.

And just like the Democratic National Convention, the Creations Convention sets the stage for conflict or reconciliation between opposing camps. The highlight of the Philadelphia gala is an appearance by Michael Dorn, who plays Lieutantant Worf in Star Trek: The Next Generation. Tension between fans of the old show and proponents of its offspring is surprisingly hard to find, except for a few malcontents. One man voices his opinion on a tee-shirt —

"It doesn't make Michael Dorn feel very at home.— she chastises. "It's like getting a new person in a job and telling him that the old person was so much better."

Albert Alecknavage brings a different sort of complaint to the convention room of the Franklin Plaza Hotel as one of 2000 people attending the Creations Convention. Albert. spoiling a button that proclaims "Trekker not a Trekkie." says that the word 'Trekkic' has been misused.

"A Trekkie is to Star Trek as a teeny—hopper is to rock and roll.•• he says. "A Trekkie has a cursory acquaintance with the material.

A Trekk-er has 'a more comprehensive knowledge," Albert continues, adding that he "undoubtedly" classifies himself as a Trekker.

Science fiction and Star Trek enthusiasts arc sometimes ridiculed for their almost obsessive interest in fantasy. But Trekker Albert contends that the hobby is a compensation for alienation at an early age and proudly includes himself among the ranks of the afflicted. He says that an avid appreciation of science fiction and comics is a means of expression for many people.

Albert has attended eight conventions in the past four years, but he notes that the cost of the events limit the number of conventions that the fan can visit. A day at the Creation Convention will set the average Trekker or Trekkie back $15.

"It makes paupers out of millionaires quicker than watermelon can turn into seeds." he says.

The high price of the two—day affair is just one of several burdens that 16—year—old Marla Bush faces. This is her first convention.

"I was always too young or it was the money or the time," she says.

But while the event may be a financial drain for its visitors, this world of fantasy, to some. can he quite a godsend in an extremely practical way.

John and Matt Belskis earn their living selling comic books at conventions in New York. New Jersey and Pennsylvania. In addition to their sales at these science fiction fetes, they sell through mail order and advertise in the Comic Buyers Guide.

The Belskis brothers, who describe the weekly publication as "the Wall Street Journal of comics." have attended over 200 conventions and describe the work as "very profitable and enjoyable."

Bruce Rosen, a Temple University senior and aspiring law school student, also works the convention. He and a friend offer posed photos with a homemade Tardis, a time-travel machine which hails from the British science fiction show Dr. Who. The show, which has been in production for 21 years, has a following so devoted that it ignores the obstacle of the Atlantic Ocean.

The Tardis appears to be a British telephone booth, but to fans of Dr. Who it apparently has more meaning. Bruce is proud of his creation which he claims is identical to the one on the television show.

"I constructed it to Metropolitan Public Call Box standards," Bruce says proudly. "Dr. Who doesn't loan theirs out often - ours is the only one in the country. Channel 23 wanted to rent it for a promotion."

Another money-maker at the show is the Tardis pendant. a replica of the key which unlocks the time machine. has sold out at the convention. Cathy Boudreau, working at a table, explains to 16-year-old Marla that the company licensed to sell the sought-after item has gone out of business. Marla frowns and moves on to another vendor, but not before she and Cathy about discuss joining a fan club.

According to Cathy, who has hawked her goods at over 80 conventions and works at an accounting firm when she is not pursuing her hobby, many of the fan clubs hang on by "the skin of their teeth."

Creations founder Adam Malin profits the most from the shows run by his company. Adam gives tidbits of information about various Star Trek stars, noting that Nichelle Nichols, of Lt. Uhuru fame, is now a musician on tour and will soon be working on an opera in Vienna.

"She looks stunning as she prepares for Star Trek 5.— she says.

Adam asks if anyone in the audience saw her at her recent performance at the Disneyland Hotel. There is no response.

Star Trek may not have launched Nichelle into a status of post—Trek fame, but some in attendance hope that the convention will move them up the professional ladder in the fantasy and adventure industry.

John Gallagher, a junior at Penn State's school of commercial art, hopes to be comic book artist. He has created a comic called "Nowhere Man" which he describes as "Lethal Weapon with a voodoo twist." He shows some of his original work, "Nowhere Man", to Ron Frenz. a professional comic artist who sells drawings at the convention. Jon gets some good advice from the pro.

"My storytelling is good, hut I need to work more on drawing from real life," John comments.

Caption: Top, Cathy Boudreau sells her wares at the Creation convention. Middle, Just one of the displays at the jamboree. Bottom, Scott Wolpow gets into the spirit of the two-day affair. Center, Lt. Worf of Star Trek: The Next Generation.