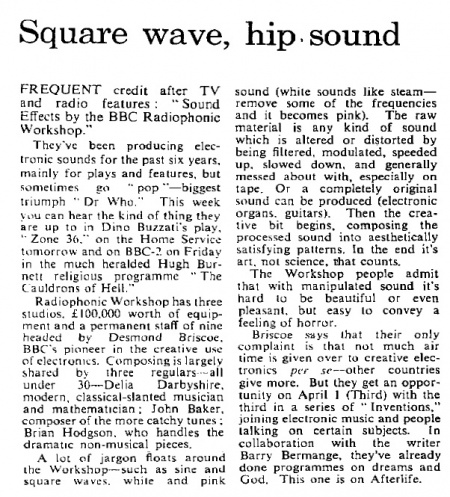 They've been producing electronic sounds for the past six years, mainly for plays and features, but sometimes go "pop"—-biggest triumph "Dr Who." This week you can hear the kind of thing they are up to in Dino Buzzati's play, "Zone 36," on the Home Service tomorrow and on BBC-2 on Friday in the much heralded Hugh Burnett religious programme "The Cauldrons of Hell."

Radiophonic Workshop has three studios, £100,000 worth of equipment and a permanent staff of nine headed by Desmond Briscoe. BBC's pioneer in the creative use of electronics. Composing is largely shared by three regulars—all under 30—Delia Derbyshire, modern, classical-slanted musician and mathematician ; John Baker, composer of the more catchy tunes ; Brian Hodgson, who handles the dramatic non-musical pieces.

A lot of jargon floats around the Workshop—such as sine and square waves. white and pink sound (white sounds like steam—remove some of the frequencies and it becomes pink). The raw material is any kind of sound which is altered or distorted by being filtered, modulated, speeded up, slowed down, and generally messed about with, especially on tape. Or a completely original sound can be produced (electronic organs. guitars). Then the creative bit begins, composing the processed sound into aesthetically satisfying patterns. In the end it's art, not science, that counts.

The Workshop people admit that with manipulated sound it's hard to be beautiful or even pleasant, but easy to convey a feeling of horror.

Briscoe says that their only complaint is that not much air time is given over to creative electronics pcy se--other countries give more. But they get an opportunity on April 1 (Third) with the third in a series of " Inventions," joining electronic music and people talking on certain subjects. In collaboration with the writer Barry Bermange, they've already done programmes on dreams and God. This one is on Afterlife.