Difference between revisions of "Stephen Thorne (The Guardian)" 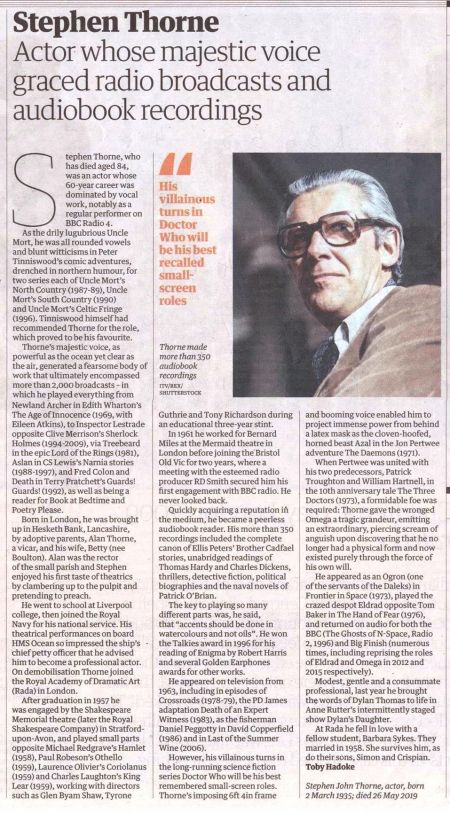 Stephen Thorne, who has died aged 84, was an actor whose 60-year career was dominated by vocal work, notably as a regular performer on BBC Radio 4.

As the drily lugubrious Uncle Mort, he was all rounded vowels and blunt witticisms in Peter Tinniswood's comic adventures, drenched in northern humour, for two series each of Uncle Mort's North Country (1987-89), Uncle Mort's South Country (1990) and Uncle Mort's Celtic Fringe (1996). Tinniswood himself had recommended Thorne for the role, which proved to be his favourite.

Thorne's majestic voice, as powerful as the ocean yet clear as the air, generated a fearsome body of work that ultimately encompassed more than 2,000 broadcasts - in which he played everything from Newland Archer in Edith Wharton's The Age of Innocence (1969, with Eileen Atkins), to Inspector Lestrade opposite Clive Merrison's Sherlock Holmes (1994-2009), via Treebeard in the epic Lord of the Rings (1981), Asian in CS Lewis's Narnia stories (1988-1997), and Fred Colon and Death in Terry Pratchett's Guards! Guards! (1992), as well as being a reader for Book at Bedtime and Poetry Please.

Born in London, he was brought up in Hesketh Bank, Lancashire, by adoptive parents, Alan Thorne, a vicar, and his wife, Betty (nee Boulton). Alan was the rector of the small parish and Stephen enjoyed his first taste of theatrics by clambering up to the pulpit and pretending to preach.

He went to school at Liverpool college, then joined the Royal Navy for his national service. His theatrical performances on board HMS Ocean so impressed the ship's chief petty officer that he advised him to become a professional actor. On demobilisation Thorne joined the Royal Academy of Dramatic Art (Rada) in London.

After graduation in 1957 he was engaged by the Shakespeare Memorial theatre (later the Royal Shakespeare Company) in Stratford-upon-Avon, and played small parts opposite Michael Redgrave's Hamlet (1958), Paul Robeson's Othello (1959), Laurence Olivier's Coriolanus (1959) and Charles Laughton's King Lear (1959), working with directors such as Glen Byam Shaw, Tyrone Guthrie and Tony Richardson during an educational three-year stint.

In 1961 he worked for Bernard Miles at the Mermaid theatre in London before joining the Bristol Old Vic for two years, where a meeting with the esteemed radio producer RD Smith secured him his first engagement with BBC radio. He never looked back.

The key to playing so many different parts was, he said, that "accents should be done in watercolours and not oils". He won the Talkies award in 1996 for his reading of Enigma by Robert Harris and several Golden Earphones awards for other works.

However, his villainous tums in the long-running science fiction series Doctor Who will be his best remembered small-screen roles. Thorne's imposing 6ft 4in frame and booming voice enabled him to project immense power from behind a latex mask as the cloven-hoofed, horned beast Azal in the Jon Pertwee adventure The Daemons (1971).

When Pertwee was united with his two predecessors, Patrick Troughton and William Hartnell, in the 10th anniversary tale The Three Doctors (1973), a formidable foe was required: Thorne gave the wronged Omega a tragic grandeur, emitting an extraordinary, piercing scream of anguish upon discovering that he no longer had a physical form and now existed purely through the force of his own will.

He appeared as an Ogron (one of the servants of the Daleks) in Frontier in Space (1973), played the crazed despot Eldrad opposite Tom Baker in The Hand of Fear (1976), and returned on audio for both the BBC (The Ghosts of N-Space, Radio 2, 1996) and Big Finish (numerous times, including reprising the roles of Eldrad and Omega in 2012 and 2015 respectively).

At Rada he fell in love with a fellow student, Barbara Sykes. They married in 1958. She survives him, as do their sons, Simon and Crispian.