Straight into a new world with Dr. Who 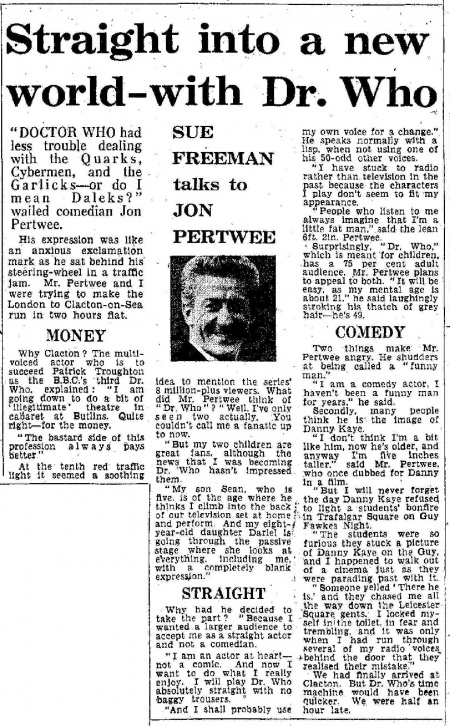 "DOCTOR WHO had less trouble dealing with the Quarks, Cybermen, and the Garlicks—or do I mean Daleks?" wailed comedian Jon Pertwee.

His expression was like an anxious exclamation mark as he sat behind his steering-wheel in a traffic jam. Mr. Pertwee and I were trying to make the London to Clacton-on-Sea run in two hours flat.

Why Clacton ? The multi-voiced actor who is to succeed Patrick Troughton as the B.B.C.'s third Dr. Who, explained : "I am going down to do a bit of 'illegitimate' theatre in cabaret at Butlins. Quite right—for the money.

"The bastard side of this profession always pays better."

At the tenth red traffic light it seemed a soothing idea to mention the series' 8 million-plus viewers. What did Mr. Pertwee think of "Dr. Who" ? "Well, I've only seen two actually. You couldn't call me a fanatic up to now.

"But my two children are great fans, although the news that I was becoming Dr. Who hasn't impressed them.

"My son Sean, who is five, is of the age where he thinks I climb into the back of our television set at home and perform. And my eight-year-old daughter Dariel going through the passive stage where she looks at everything, including me, with a completely blank expression."

Why had he decided to take the part ? "Because I wanted a larger audience to accept me as a straight actor and not a comedian.

"I am an actor at heart— not a comic. And now I want to do what I really enjoy. I will play Dr. Who absolutely straight with no baggy trousers."

"And I shall probably use my own voice for a change." He speaks normally with a lisp, when not using one of his 50-odd other voices.

"I have stuck to radio rather than television in the past because the characters I play don't seem to fit my appearance.

"People who listen to me always imagine that I'm a little fat man," said the lean 6ft. 2in. Pertwee.

Surprisingly, "Dr. Who," which is meant for children, has a 75 per cent adult audience. Mr. Pertwee plans to appeal to both. "It will be easy, as my mental age is about 21." he said laughingly stroking his thatch of grey hair—he's 49.

"I am a comedy actor, I haven't been a funny man for years." he said.

Secondly, many people think he is the image of Danny Kaye.

"I don't think I'm a bit like him, now he's older, and anyway I'm five inches taller" said Mr. Pertwee, who once dubbed for Danny in a film.

"But I will never forget the day Danny Kaye refused to light a students' bonfire in Trafalgar Square on Guy Fawkes Night.

"The students were so furious they stuck a picture of Danny Kaye on the Guy, and I happened to walk out of a cinema just as they were parading past with it.

"Someone yelled 'There he is,' and they chased me all the way down the Leicester Square gents. I locked myself in the toilet, in fear and trembling, and it was only when I had run through several of my radio voices. behind the door that they realised their mistake."

We had finally arrived at Clacton. But Dr. Who's time machine would have been quicker. We were half an hour late.