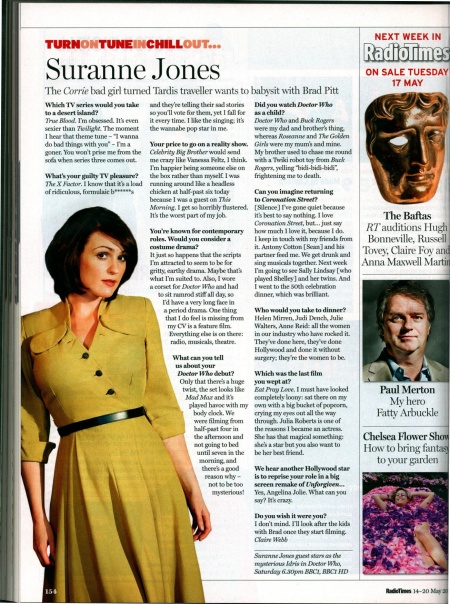 True Blood. I'm obsessed. It's even sexier than Twilight. The moment I hear that theme tune - "I wanna do bad things with you" - I'm a goner. You won't prise me from the sofa when series three comes out.

What's your guilty TV pleasure? The X Factor. I know that it's a load of ridiculous, formulaic b******s

and they're telling their sad stories so you'll vote for them, yet I fall for it every time. I like the singing; it's the wannabe pop star in me.

Your price to go on a reality show. Celebrity Big Brother would send me crazy like Vanessa Feltz, I think. I'm happier being someone else on the box rather than myself. I was running around like a headless chicken at half-past six today because I was a guest on This Morning. I get so horribly flustered. It's the worst part of my job.

You're known for contemporary roles. Would you consider a costume drama?

It just so happens that the scripts I'm attracted to seem to be for gritty, earthy drama. Maybe that's what I'm suited to. Also, I wore a corset for Doctor Who and had to sit ramrod stiff all day, so I'd have a very long face in a period drama. One thing that I do feel is missing from my CV is a feature film. Everything else is on there: radio, musicals, theatre.

What can you tell us about your Doctor Who debut?

Only that there's a huge twist, the set looks like

Mad Max and it's played havoc with my body clock. We were filming from half-past four in the afternoon and not going to bed until seven in the morning, and there's a good reason why - not to be too mysterious!

Did you watch Doctor Who as a child?

Doctor Who and Buck Rogers were my dad and brother's thing, whereas Roseanne and The Golden Girls were my mum's and mine. My brother used to chase me round with a Twiki robot toy from Buck Rogers, yelling "bidi-bidi-bidi", frightening me to death.

Can you imagine returning to Coronation Street?

[Silence] I've gone quiet because it's best to say nothing. I love Coronation Street, but... just say how much I love it, because I do. I keep in touch with my friends from it. Antony Cotton [Sean] and his partner feed me. We get drunk and sing musicals together. Next week I'm going to see Sally Lindsay [who played Shelley] and her twins. And I went to the 50th celebration dinner, which was brilliant.

Who would you take to dinner?

Helen Mirren, Judi Dench, Julie Walters, Anne Reid: all the women in our industry who have rocked it. They've done here, they've done Hollywood and done it without surgery; they're the women to be.

Which was the last film you wept at?

Eat Pray Love. I must have looked completely loony: sat there on my own with a big bucket of popcorn, crying my eyes out all the way through. Julia Roberts is one of the reasons I became an actress. She has that magical something: she's a star but you also want to be her best friend.

We hear another Hollywood star is to reprise your role in a big screen remake of Unforgiven...

Yes, Angelina Jolie. What can you say? It's crazy.

Do you wish it were you?

I don't mind. I'll look after the kids with Brad once they start filming. Suranne Jones guest stars as the mysterious Idris in Doctor Who, Saturday 6.30pm BBC1, BBC1 HD