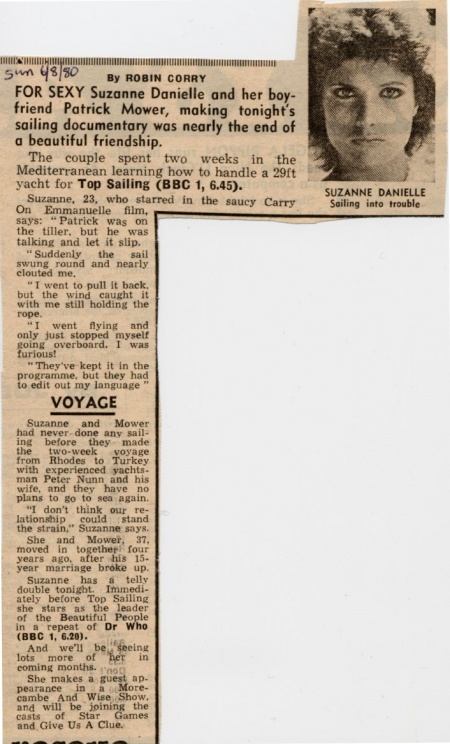 FOR SEXY Suzanne Danielle and her boyfriend Patrick Mower, making tonight's sailing documentary was nearly the end of a beautiful friendship.

The couple spent two weeks in the Mediterranean learning how to handle a 29ft yacht for Top Sailing (BBC 1, 6.45).

Suzanne, 23, who starred in the saucy Carry On Emmanuelle film, says: "Patrick was on the tiller, but he was talking and let it slip.

"Suddenly the sail swung round and nearly clouted me.

"I went to pull it back, but the wind caught it with me still holding the rope.

"I went flying and only just stopped myself going overboard. I was furious!

"They've kept it in the programme, but they had to edit out my language "

Suzanne and Mower had never done any sailing before they made the two-week voyage from Rhodes to Turkey with experienced yachtsman Peter Nunn and his wife, and they have no plans to go to sea again.

"I don't think our relationship could stand the strain," Suzanne says.

She and Mower, 37, moved in together four years ago, after his 15-year marriage broke up.

Suzanne has a telly double tonight. Immediately before Top Sailing she stars as the leader of the Beautiful People in a repeat of Dr Who (BBC 1, 6.20).

And we'll be seeing lots more of her in coming months.

She makes a guest appearance in a Morecambe And Wise Show, and will be joining the casts of Star Games and Give Us A Clue.