TV wizards save Dr Who classic from mists of time 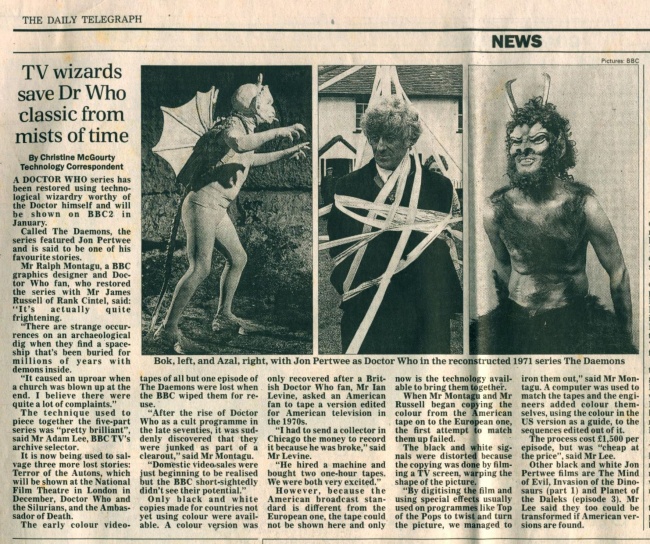 A DOCTOR WHO series has been restored using technological wizardry worthy of the Doctor himself and will be shown on BBC2 in January.

Called The Daemons, the series featured Jon Pertwee and is said to be one of his favourite stories.

Mr Ralph Montagu, a BBC graphics designer and Doctor Who fan, who restored the series with Mr James Russell of Rank Cintel, said: "It's actually quite frightening.

"There are strange occurrences on an archaeological dig when they find a spaceship that's been buried for millions of years with demons inside.

"It caused an uproar when a church was blown up at the end. I believe there were quite a lot of complaints."

It is now being used to salvage three more lost stories: Terror of the Autons, which will be shown at the National Film Theatre in London in December, Doctor Who and the Silurians, and the Ambassador of Death.

The early colour videotapes of all but one episode of The Daemons were lost when the BBC wiped them for reuse.

"After the rise of Doctor Who as a cult programme in the late seventies, it was suddenly discovered that they were junked as part of a clearout," said Mr Montagu.

"Domestic videos-sales were just beginning to be realised but the BBC short-sightedly didn't see their potential."

Only black and white copies made for countries not yet using colour were available. A colour version was only recovered after a British Doctor Who fan, Mr Ian Levine, asked an American fan to tape a version edited for American television in the 1970s.

"I had to send a collector in Chicago the money to record it because he was broke," said Mr Levine.

"He hired a machine and bought two one-hour tapes. We were both very excited."

The black and White signals were distorted because the copying was done by filming a TV screen, warping the shape of the picture.

"By digitising the film and using special effects usually used on programmes like Top of the Pops to twist, and turn the picture, we managed to iron them out," said Mr Montagu. A computer was used to match the tapes and the engineers added colour themselves, using the colour in the US version as a guide, to the sequences edited out of it.

Other black and white Jon Pertwee films are The Mind of Evil, Invasion of the Dinosaurs (part 1) and Planet of the Daleks (episode 3). Mr Lee said they too could be transformed if American versions are found.

Caption: Bok, left, and Azal, right, with Jon Pertwee as Doctor Who in the reconstructed 1971 series The Daemons