Talking to a Time Lord 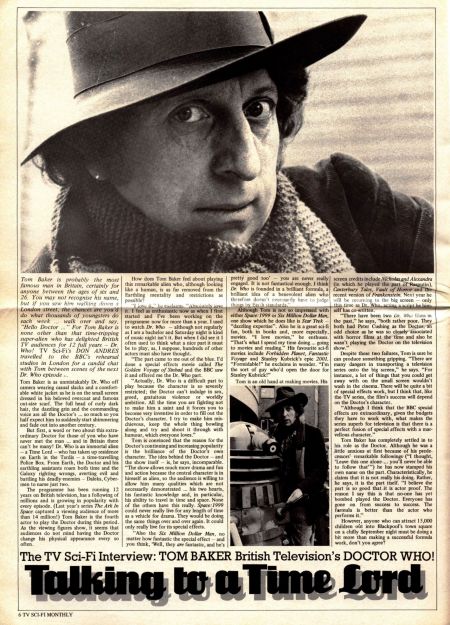 Tom Baker is probably the most famous man in Britain, certainly for anyone between the ages of six and 26. You may not recognise his name, but if you saw him walking down a London street, the chances are you'd do what thousands of youngsters do each week ... walk over and say, "Hello Doctor ..." For Tom Baker is none other than that time-tripping super-alien who has delighted British TV audiences for 12 full years - Dr. Who! TV Sci-Fi's DON ANDRES travelled to the BBC's rehearsal studios in London for a candid chat with Tom between scenes of the next Dr. Who episode ...

Tom Baker is as unmistakably Dr. Who off camera wearing casual slacks and a comfortable white jacket as he is on the small screen dressed in his beloved overcoat and famous out-size scarf. The full head of curly dark hair, the dazzling grin and the commanding voice are all the Doctor's ... so much so you half expect him to suddenly start shimmering and fade out into another century.

But first, a word or two about this extraordinary Doctor for those of you who have never met the man ... and in Britain there can't be many! Dr. Who is an immortal alien — a Time Lord — who has taken up residence on Earth in the Tardis — a time-travelling Police Box. From Earth, the Doctor and his earthling assistants roam both time and the Galaxy righting wrongs, averting evil and battling his deadly-enemies — Daleks, Cyber-men to name just two.

The programme has been running 12 years on British television, has a following of millions and is growing in popularity with every episode. (Last year's series The Ark In Space captured a viewing audience of more than 14 million!) Tom Baker is the fourth actor to play the Doctor during this period. As the viewing figures show, it seems that audiences do not mind having the Doctor change his physical appearance every so often.

How does Tom Baker feel about playing this remarkable alien who, although looking like a human, is as far removed from the Earthling mentality and restrictions as possible?

"I love it," he exclaims. "Absolutely love it. I feel as enthusiastic now as when I first started and I've .been working on the programme now for more than a year. I used to watch Dr. Who — although not regularly as I am a bachelor and Saturday night is kind of music night isn't it. But when I did see it I often used to think what a nice part it must be to play, as, I suppose, hundreds of other actors must also have thought.

"The part came to me out of the blue. I'd done a special effects movie called The Golden Voyage of Sinbad and the BBC saw it and offered me the Dr. Who part.

"Actually, Dr. Who is a difficult part to play because the character is so severely restricted; the Doctor can't indulge in sex, greed, gratuitous violence or worldly ambition. All the time you are fighting not to make him a saint and it forces you to become very inventive in order to fill out the Doctor's character. I try to make him mischievous, keep the whole thing bowling along and try and shoot it through with humour, which everyone loves."

Tom is convinced that the reason for the Doctor's continuing and increasing popularity is the brilliance of the Doctor's own character. The idea behind the Doctor — and the show itself — is, he says, incomparable. "The show allows much more drama and fun and action because the central character is in himself as alien, so the audience is willing to allow him many qualities which are not necessarily demonstrated ... his two hearts, his fantastic knowledge and, in particular, his ability to travel in time and space. None of the others have this really. Space:1999 could never really live for any length of time as a vehicle for drama. They would be doing the same things over and over again. It could only really live for its special effects.

"Also the Six Million Dollar Man, no matter how fantastic the special effect -- and you think, 'Well, they are fantastic, and he's pretty good too' — you are never really engaged. It is not fantastical enough. I think Dr. Who is founded in a brilliant formula, a brilliant idea of a benevolent alien who therefore doesn't necessarily have to judge things by Earth Standards.

Although Tom is not so impressed with either Space:1999 or Six Million Dollar Man, one show which he does like is Star Trek — "dazzling expertise". Also he is a great sci-fi fan, both in books and, more especially, movies. "I love movies," he enthuses. "That's what I spend my time doing ... going to movies and reading." His favourite sci-fi movies include Forbidden Planet, Fantastic Voyage and Stanley Kubrick's epic 2001. "Formidable!" he exclaims in wonder. "I'm the sort of guy who'd open the door for Stanley Kubrick!"

Tom is an old hand at making movies. His screen credits include Nicholas and Alexandra (in which he played the part of Rasputin), Canterbury Tales, Vault of Horror an recent version of Frankenstein. Next year he will be returning to the big screen — only this time as Dr. Who, acting in a script he has co-written.

"There have been two Dr. Who films in the past," he says, "both rather poor. They both had Peter Cushing as the Doctor, an odd choice as he was so closely associated with horror films at the time and also he wasn't playing the Doctor on the television show."

Despite these two failures, Tom is sure he can produce something gripping. "There are many dangers in transporting a television series onto the big screen," he says. "For instance, a lot of things that you could get away with on the small screen wouldn't wash in the cinema. There will be quite a bit of special effects work, but I think that, like the TV series, the film's success will depend on the Doctor's character.

"Although I think that the' BBC special effects are extraordinary, given the budgets they have to work with, what makes the series superb for television is that there is a perfect fusion of special effects with a marvellous character."

Tom Baker has completely settled in to his. role as the Doctor. Although he was a little anxious at first because of his predecessors' remarkable followings- ("I thought, 'Leave this one alone ... you'll never be able to follow that'") he has now stamped his own name on the part. Characteristically, he claims that it is not really his doing. Rather, he says, it is the part itself. "I believe the part is so good that .it is actor proof. The reason I say this is that no-one has yet bombed played the Doctor. Everyone has gone on from success to success. The formula is better than the actor who performs it."

However, anyone who can attract 15,000 children out into Blackpool's town square on a chilly September night must be doing a bit more than making a successful formula work, don't you agree?