The (new) Doctor is in; the diagnosis is good 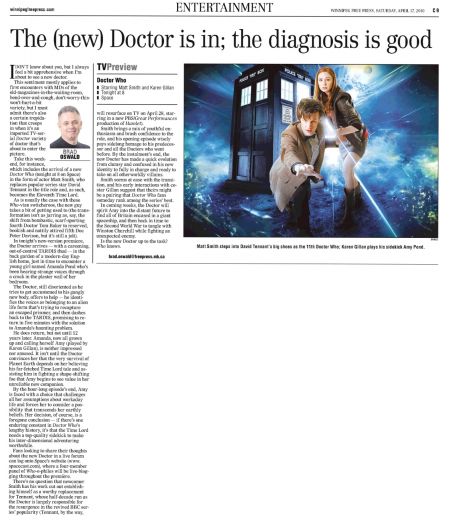 I DON'T know about you, but I always feel a bit apprehensive when I'm about to see a new doctor.

This sentiment mostly applies to first encounters with MDs of the old-magazines-in-the-waiting-room, bend-over-and-cough, don't-worry-this-won't-hurt-a-bit variety, but I must admit there's also a certain trepidation that creeps in when it's an imported TV-serial Doctor variety of doctor that's about to enter the picture.

Take this weekend, for instance, which includes the arrival of a new Doctor Who (tonight at 8 on Space) in the form of actor Matt Smith, who replaces popular series star David Tennant in the title role and, as such, becomes the Eleventh Time Lord.

As is usually the case with these Whovian switcheroos, the new guy takes a bit of getting used to (the transformation isn't as jarring as, say, the shift from bombastic, scarf-sporting fourth Doctor Tom Baker to reserved, bookish and nattily attired fifth Doc Peter Davison, but it's still a jolt).

In tonight's new-version premiere, the Doctor arrives — with a careening, out-of-control TARDIS thud — in the back garden of a modern-day English home, just in time to encounter a young girl named Amanda Pond who's been hearing strange voices through a crack in the plaster wall of her bedroom.

The Doctor, still disoriented as he tries to get accustomed to his gangly new body, offers to help — he identifies the voices as belonging to an alien life form that's trying to recapture an escaped prisoner, and then dashes back to the TARDIS, promising to return in five minutes with the solution to Amanda's haunting problem.

He does return, but not until 12 years later. Amanda, now all grown up and calling herself Amy (played by Karen Gillan), is neither impressed nor amused. It isn't until the Doctor convinces her that the very survival of Planet Earth depends on her believing his far-fetched Time Lord tale and assisting him in fighting a shape-shifting foe that Amy begins to see value in her unreliable new companion.

By the hour-long episode's end, Amy is faced with a choice that challenges all her assumptions about workaday life and forces her to consider a possibility that transcends her earthly beliefs. Her decision, of course, is a foregone conclusion — if there's one enduring constant in Doctor Who's lengthy history, it's that the Time Lord needs a top-quality sidekick to make his inter-dimensional adventuring worthwhile.

Fans looking to share their thoughts about the new Doctor in a live forum can log onto Spaces website (www.spacecast.com), where a four-member panel of Who-o-philes will be live-blogging throughout the premiere.

There's no question that newcomer Smith has his work cut out establishing himself as a worthy replacement for Tennant, whose half-decade run as the Doctor is largely responsible for the resurgence in the revived BBC series' popularity (Tennant, by the way, will resurface on TV on April 28, starring in a new PBS/Great Performances production of Hamlet).

Smith brings a mix of youthful enthusiasm and brash confidence to the role, and his opening episode wisely pays sidelong homage to his predecessor and all the Doctors who went before. By the instalment's end, the new Doctor has made a quick evolution from clumsy and confused in his new identity to fully in charge and ready to take on all otherworldly villains.

Smith seems at ease with the transition, and his early interactions with costar Gillan suggest that theirs might be a pairing that Doctor Who fans someday rank among the series' best.

In coming weeks, the Doctor will spirit Amy into the distant future to find all of Britain encased in a giant spaceship, and then back in time to the Second World War to tangle with Winston Churchill while fighting an unexpected enemy.

Is the new Doctor up to the task? Who knows.