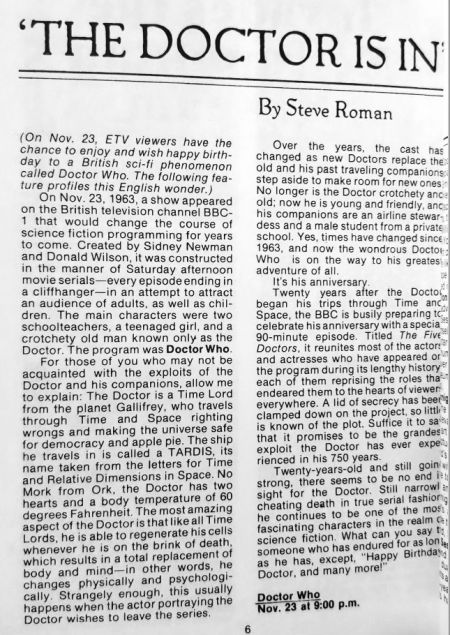 (On Nov. 23, ETV viewers have the chance to enjoy and wish happy birthday to a British sci-fi phenomenon called Doctor Who. The following feature profiles this English wonder.)

On Nov. 23, 1963, a show appeared on the British television channel BBC-1 that would change the course of science fiction programming for years to come. Created by Sidney Newman and Donald Wilson, it was constructed in the manner of Saturday afternoon movie serials—every episode ending in a cliffhanger—in an attempt to attract an audience of adults, as well as children. The main characters were two schoolteachers, a teenaged girl, and a crotchety old man known only as the Doctor. The program was Doctor Who.

For those of you who may not be acquainted with the exploits of the Doctor and his companions, allow me to explain: The Doctor is a Time Lord from the planet Gallifrey, who travels through Time and Space righting wrongs and making the universe safe for democracy and apple pie. The ship he travels in is called a TARDIS, its name taken from the letters for Time and Relative Dimensions in Space. No Mork from Ork, the Doctor has two hearts and a body temperature of 60 degrees Fahrenheit. The most amazing aspect of the Doctor is that like all Time Lords, he is able to regenerate his cells whenever he is on the brink of death, which results in a total replacement of body and mind—in other words, he changes physically and psychologically. Strangely enough, this usually happens when the actor portraying the Doctor wishes to leave the series.

Over the years, the cast has changed as new Doctors replace the old and his past traveling companions step aside to make room for new ones. No longer is the Doctor crotchety and old; now he is young and friendly, and his companions are an airline stewardess and a male student from a private school. Yes, times have changed since 1963, and now the wondrous Doctor Who is on the way to his greaten adventure of all.

Twenty years after the Doctor began his trips through Time and Space, the BBC is busily preparing to celebrate his anniversary with a special 90-minute episode. Titled The Five Doctors, it reunites most of the actors and actresses who have appeared or the program during its lengthy history; each of them reprising the roles that endeared them to the hearts of viewers everywhere. A lid of secrecy has been clamped down on the project, so little is known of the plot. Suffice it to say that it promises to be the grandest exploit the Doctor has ever experienced in his 750 years.

Twenty-years-old and still going strong, there seems to be no end in sight for the Doctor. Still narrowly cheating death in true serial fashion, he continues to be one of the most fascinating characters in the realm science fiction. What can you say someone who has endured for as long as he has, except, "Happy Birthday, Doctor, and many more!"