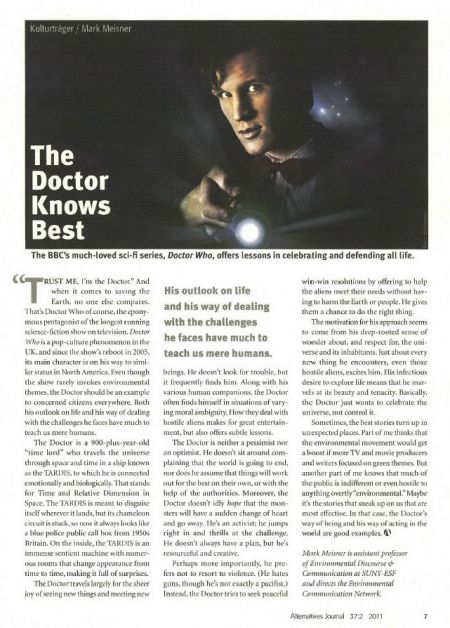 The BBC's much-loved sci-fi series, Doctor Who, offers lessons in celebrating and defending all life.

"TRUST ME, I'm the Doctor." And when it comes to saving the Earth, no one else compares. That's Doctor Who of course, the eponymous protagonist of the longest running science-fiction show on television. Doctor Who is a pop-culture phenomenon in the UK, and sum the show's reboot in 2005, its main character is on his way to similar status in North America. Even though the show rarely invokes environmental thanes, the Doctor should be an example to concerned citizens everywhere. Both his outlook on life and his way of dealing with the challenges he faces have much to teach us mere humans.

The Doctor is a 900-plus-year-old "time lord" who travels the universe through space and time in a ship known as the TARDIS, to which he is connected emotionally and biologically. TARDIS stands for Time and Relative Dimension in Space. The TARDIS is meant to disguise itself wherever it lands, but its chameleon circuit is stuck, so now it always looks like a blue police public call bon from 1950c Britain. On the inside, the TABU'S is an immense unbent machine with numerous rooms that change appearance from time to time, making it full of surprises.

The Doctor travels largely for the sheer joy of seeing new things and meeting new beings. He doesn't look for trouble, but it frequently finds him. Along with his various human companions, the Doctor often finds himself in situations of varying moral ambiguity. How they deal with hostile aliens makes for great entertainment, but also offers subtle lessons.

The Doctor is neither a pessimist nor an optimist. He doesn't sit around complaining that the world is going to end, nor does he assume that things will work out for the best on their own, or with the help of the authorities. Moreover, the Doctor doesn't idly hope that the monsters will have a sudden change of heart and go away. Ile's an activist: Ire lumps right in and thrills at the challenge. He doesn't always have a plan, but he's resourceful and creative.

Perhaps more importantly, he prefers not to resort to violence. (He hates guns, though he's not exactly a pacifist.) Instead, the Doctor tries to seek peaceful win-win resolutions by offering to help the aliens wet their needs without having to harm the Earth or people. Ile gives them a chance to do the right thing. The motivation for his approach seems to come from his deep-rooted sense of wonder about, and respect for, the universe and its inhabitants. lust about every new thing he encounters, even those hostile aliens, excites him. His infectious desire to explore life means that he marvels at its beauty and tenacity. Basically, the Doctor just wants to celebrate the universe. not control it.

Sometimes, the best storks tutu up in unexpected places. Part of me thinks that the environmental movement would get a boost if more TV and movie producers and writers focused on green themes. But another part of me knows that much of the public is indifferent or even hostile to anything overtly "environmental." Maybe it's the stories that sneak up on us that arc most effective. In that case. the Doctor's way of being and his way of acting in the world are good examples.