The Doctor on Hold 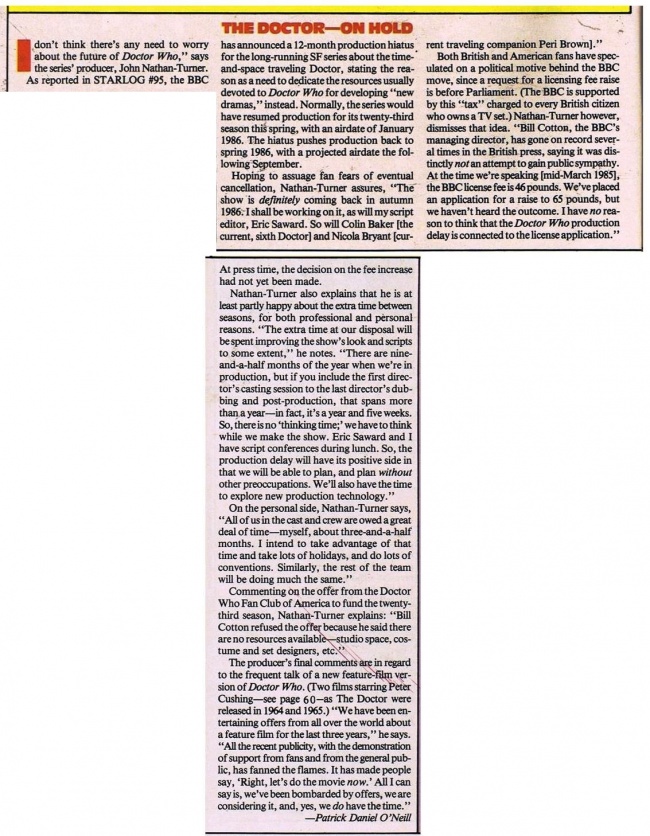 I don't think there's any need to worry about the future of Doctor Who," says the series' producer, John Nathan-Turner.

As reported in STARLOG #95, the BBC has announced a 12-month production hiatus for the long-running SF series about the time-and-space traveling Doctor, stating the reason as a need to dedicate the resources usually devoted to Doctor Who for developing "new dramas," instead. Normally, the series would have resumed production for its twenty-third season this spring, with an airdate of January 1986. The hiatus pushes production back to spring 1986, with a projected airdate the following September.

Hoping to assuage fan fears of eventual cancellation, Nathan-Turner assures, "The show is definitely coming back in autumn 1986. I shall be working on it, as will my script editor, Eric Saward. So will Colin Baker [the current, sixth Doctor] and Nicola Bryant [current traveling companion Peri Brown]."

Both British and American fans have speculated on a political motive behind the BBC move, since a request for a licensing fee raise is before Parliament. (The BBC is supported by this "tax" charged to every British citizen who owns a TV set.) Nathan-Turner however, dismisses that idea. "Bill Cotton, the BBC's managing director, has gone on record several times in the British press, saying it was distinctly not an attempt to gain public sympathy. At the time we're speaking [mid-March 1985], the BBC license fee is 46 pounds. We've placed an application for a raise to 65 pounds, but we haven't heard the outcome. I have no reason to think that the Doctor Who production delay is connected to the license application."

At press time, the decision on the fee increase had not yet been made.

Nathan-Turner also explains that he is at least partly happy about the extra time between seasons, for both professional and personal reasons. "The extra time at our disposal will be spent improving the show's look and scripts to some extent," he notes. "There are nine-and-a-half months of the year when we're in production, but if you include the first director's casting session to the last director's dubbing and post-production, that spans more than a year—in fact, it's a year and five weeks. So, there is no 'thinking time;' we have to think while we make the show. Eric Saward and I have script conferences during lunch. So, the production delay will have its positive side in that we will be able to plan, and plan without other preoccupations. We'll also have the time to explore new production technology."

On the personal side, Nathan-Turner says, "All of us in the cast and crew are owed a great deal of time—myself, about three-and-a-half months. I intend to take advantage of that time and take lots of holidays, and do lots of conventions. Similarly, the rest of the team will be doing much the same."

Commenting on the offer from the Doctor Who Fan Club of America to fund the twenty-third season, Nathan-Turner explains: "Bill Cotton refused the offer because he said there are no resources available studio space, costume and set designers, etc."

The producer's final comments are in regard to the frequent talk of a new feature-film version of Doctor Who. (Two films starring Peter Cushing—see page 60 —as The Doctor were released in 1964 and 1965.) "We have been entertaining offers from all over the world about a feature film for the last three years," he says. "All the recent publicity, with the demonstration of support from fans and from the general public, has fanned the flames. It has made people say, 'Right, let's do the movie now.' All I can say is, we've been bombarded by offers, we are considering it, and, yes, we do have the time."