The Good Doctor travels back in time 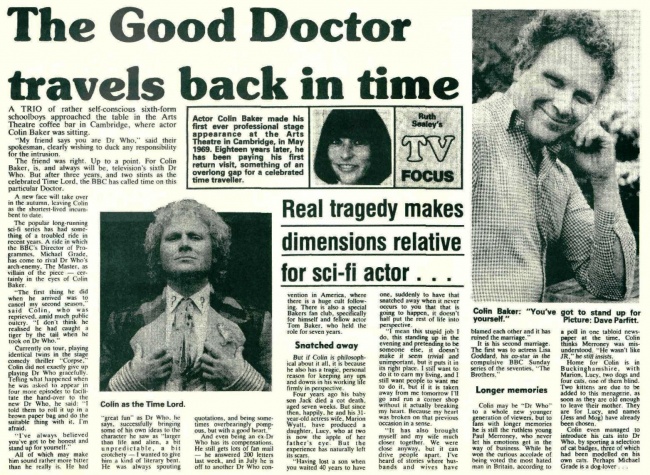 A TRIO of rather self-conscious sixth-form schoolboys approached the table in the Arts Theatre coffee bar in Cambridge, where actor Colin Baker was sitting.

"My friend says you are Dr Who." said their spokesman, clearly wishing to duck any responsibility for the intrusion.

The friend was right. Up to a point. For Colin Baker, is, and always will be. television's sixth Dr Who. But after three years, and two stints as the celebrated Time Lord, the BBC has called time on this particular Doctor.

A new face will take over in the autumn, leaving Colin as the shortest-lived incumbent to date.

The popular long-running sci-fi series has had something of a troubled ride in recent years. A ride in which the BBC's Director of Programmes, Michael Grade. has come to rival Dr Who's arch-enemy, The Master. as villain of the piece — certainly in the eyes of Colin Baker.

"The first thing he did when he arrived was to cancel my second season," said Colin. who was reprieved, amid much public outcry. "I don't think he realised he had caught a tiger by the tail when he took on Dr Who."

Currently on tour, playing identical twins in the stage comedy thriller "Corpse." Colin did not exactly give up playing Dr Who gracefully. Telling what happened when he was asked to appear in four more episodes to facilitate the hand-over to the new Dr Who, he said: "I told them to roll it up in a brown paper bag and do the suitable thing with it. I'm afraid.

"I've always believed you've got to be honest and stand up for yourself."

All of which may make him sound rather more bitter than he really is. He had "great fun" as Dr Who, he says, successfully bringing some of his own ideas to the character he saw as "larger than life and alien, a bit unpredictable, a hit crotchety — I wanted to give him a kind of literary bent. He was always spouting had quotations. and being sometimes overbearingly pompous. but with a good heart."

And even being an ex-Dr Who has its compensations. He still gets lots of fan mail — he answered 200 letters last week, and in July he is off to another Dr Who convention in America, where there is a huge cult following. There is also a special Bakers fan club, specifically for himself and fellow actor Tom Baker, who held the role for seven years.

But if Colin is philosophical about it all, it is because he also has a tragic, personal reason for keeping any ups and downs in his working life firmly in perspective.

Four years ago his baby son Jack died a cot death, aged seven weeks. But since then, happily, he and his 31-year-old actress wife, Marion Wyatt, have produced a daughter, Lucy. who at two is now the apple of her father's eye. But the experience has naturally left its scars.

"Having lost a son when you waited 40 years to have one, suddenly to have that snatched away when it never occurs to you that that is going to happen, it doesn't half put the rest of life into perspective.

"I mean this stupid job I do, this standing up in the evening and pretending to be someone else, it doesn't make it seem trivial and unimportant, but it puts it in its right place. I still want to do it to earn my living, and I still want people to want me to do it, but if it is taken away from me tomorrow I'll go and run a corner shop without it actually breaking my heart. Because my heart was broken on that previous occasion in a sense.

"It has also brought myself and my wife much closer together. We were close anyway, but it can drive people apart. I've heard of stories where husbands and wives have blamed each other and it has ruined the marriage."

It is his second marriage. The first was to actress Lisa Goddard, his co-star in the compulsive BBC Sunday series of the seventies, "The Brothers."

Colin may he "Dr Who" to a whole new younger generation of viewers, but to fans with longer memories he is still the ruthless young Paul Merroney, who never let his emotions get in the way of business. While he won the curious accolade of being voted the most hated man in Britain. according to a poll in one tabloid newspaper at the time, Colin thinks Merroney was misunderstood. "He wasn't like JR," he still insists.

Home for Colin is in Buckinghamshire, with Marion, Lucy, two dogs and four cats, one of them blind. Two kittens are due to be added to this menagerie, as soon as they are old enough to leave their mother. They are for Lucy, and names (Jess and Mog) have already been chosen.

Colin even managed to introduce his cats into Dr Who, by sporting a selection of cat badges, three of which had been modelled on his own cats. Perhaps Michael Grade is a dog-lover ...

Actor Colin Baker made his first ever professional stage appearance at the Arts Theatre in Cambridge, in May 1969. Eighteen years later, he has been paying his first return visit, something of an overlong gap for a celebrated time traveller.

Caption: Colin as the Time Lord.

Caption: Colin Baker: "You've got to stand up for yourself."