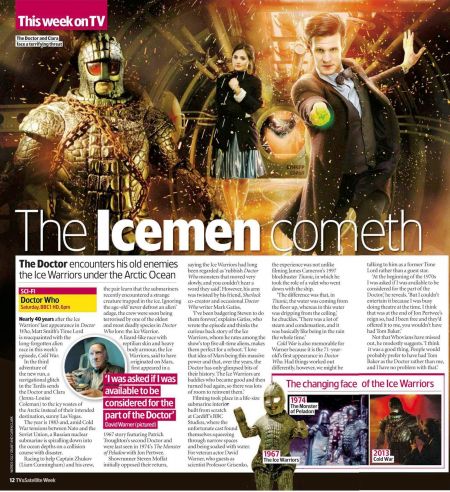 Nearly 40 years after the Ice Warriors' last appearance in Doctor Who, Matt Smith's Time Lord is reacquainted with the long-forgotten alien race in this week's episode, Cold War.

In the third adventure of the new run, a navigational glitch in the Tardis sends the Doctor and Clara (Jenna-Louise Coleman) to the icy wastes of the Arctic instead of their intended destination, sunny Las Vegas.

The year is 1983 and, amid Cold War tensions between Nato and the Soviet Union, a Russian nuclear submarine is spiralling down into the ocean depths on a collision course with disaster.

Racing to help Captain Zhukov (Liam Cunningham) and his crew, the pair learn that the submariners recently encountered a strange creature trapped in the ice. Ignoring the age-old 'never defrost an alien' adage, the crew were soon being terrorised by one of the oldest and most deadly species in Doctor Who lore: the Ice Warrior.

A lizard-like race with reptilian skin and heavy body armour, the Ice Warriors, said to have originated on Mars, first appeared in a 1967 story featuring Patrick Troughton's second Doctor and were last seen in 1974's The Monster of Peladon with Jon Pertwee.

Showrunner Steven Moffat initially opposed their return, saying the Ice Warriors had long been regarded as 'rubbish Doctor Who monsters that moved very slowly, and you couldn't hear a word they said. However, his arm was twisted by his friend, Sherlock co-creator and occasional Doctor Who writer Mark Gatiss.

'I've been badgering Steven to do them forever,' explains Gatiss, who wrote the episode and thinks the curious back story of the Ice Warriors, whom he rates among the show's top five all-time aliens, makes them perfect for a reboot. 'I love that idea of Mars being this massive power and that, over the years, the Doctor has only glimpsed bits of their history. The Ice Warriors are baddies who became good and then turned bad again, so there was lots of room to reinvent them.'

Filming took place in a life-size submarine interior built from scratch at Cardiff's BBC Studios, where the unfortunate cast found themselves squeezing through narrow spaces and being soaked with water. For veteran actor David Warner, who guests as scientist Professor Grisenko, the experience was not unlike filming James Cameron's 1997 blockbuster Titanic, in which he took the role of a valet who went down with the ship.

'The difference was that, in Titanic, the water was coming from the floor up, whereas in this water was dripping from the ceiling, he chuckles. 'There was a lot of steam and condensation, and it was basically like being in the rain the whole time.'

Cold War is also memorable for Warner because it is the 71-year-old's first appearance in Doctor Who. Had things worked out differently, however, we might be talking to him as a former Time Lord rather than a guest star.

'At the beginning of the 1970s I was asked if I was available to be considered for the part of the Doctor,' he reveals. 'But I couldn't entertain it because I was busy doing theatre at the time. I think that was at the end of Jon Pertwee's reign so, had I been free and they'd offered it to me, you wouldn't have had Tom Baker.'

Not that Whovians have missed out, he modestly suggests. 'I think it was a good thing. People would probably prefer to have had Tom Baker as the Doctor rather than me, and I have no problem with that.'

Caption: The Doctor and Clara face a terrifying threat