The Return of Doctor Who (Library Journal) 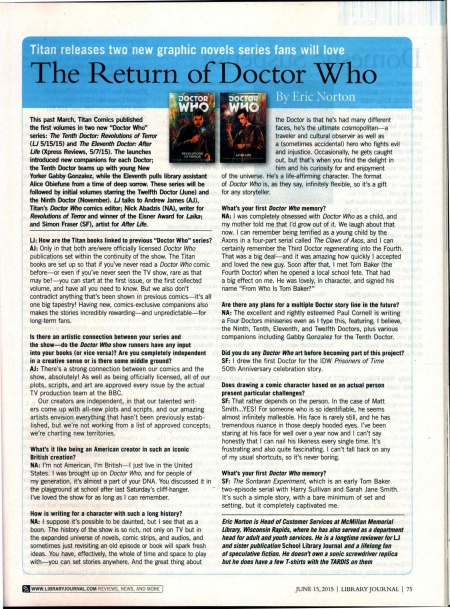 This past March, Titan Comics published the first volumes in two new "Doctor Who" series: The Tenth Doctor: Revolutions of Terror (LJ 5/15/15) and The Eleventh Doctor: After Life (Xpress Reviews, 5/7/15). The launches introduced new companions for each Doctor; the Tenth Doctor teams up with young New Yorker Gabby Gonzalez, while the Eleventh pulls library assistant Alice Obiefune from a time of deep sorrow. These series will be followed by initial volumes starring the Twelfth Doctor (June) and the Ninth Doctor (November). U talks to Andrew James (AJ), Titan's Doctor Who comics editor; Nick Abadzis (NA), writer for Revolutions of Terror and winner of the Eisner Award for Laika; and Simon Fraser (SF), artist for After Life.

LJ: How are the Titan books linked to previous "Doctor Who" series?

AJ: Only in that both are/were officially licensed Doctor Who publications set within the continuity of the show. The Titan books are set up so that if you've never read a Doctor Who comic before—or even if you've never seen the TV show, rare as that may be!—you can start at the first issue, or the first collected volume, and have all you need to know. But we also don't contradict anything that's been shown in previous comics—it's all one big tapestry! Having new, comics-exclusive companions also makes the stories incredibly rewarding—and unpredictable—for long-term fans.

Is there an artistic connection between your series and the show—do the Doctor Who show runners have any input into your books (or vice versa)? Are you completely independent in a creative sense or is there some middle ground?

AJ: There's a strong connection between our comics and the show, absolutely! As well as being officially licensed, all of our plots, scripts, and art are approved every issue by the actual TV production team at the BBC.

Our creators are independent, in that our talented writers come up with all-new plots and scripts, and our amazing artists envision everything that hasn't been previously established, but we're not working from a list of approved concepts; we're charting new territories.

What's it like being an American creator in such an iconic British creation?

NA: I'm not American, I'm British—I just live in the United States. I was brought up on Doctor Who, and for people of my generation, it's almost a part of your DNA. You discussed the playground at school after last Saturday's cliff-hanger. I've loved the show for as long as I can remember.

How is writing for a character with such a long history?

NA: I suppose it's possible to be daunted, but I see that as a boon. The history of the show is so rich, not only on TV but in the expanded universe of novels, comic strips, and audios, and sometimes just revisiting an old episode or book will spark fresh ideas. You have, effectively, the whole of time and space to play with—you can set stories anywhere. And the great thing about the Doctor is that he's had many different faces, he's the ultimate cosmopolitan—a traveler and cultural observer as well as a (sometimes accidental) hero who fights evil and injustice. Occasionally, he gets caught out, but that's when you find the delight in

him and his curiosity for and enjoyment of the universe. He's a life-affirming character. The format of Doctor Who is, as they say, infinitely flexible, so it's a gift for any storyteller.

What's your first Doctor Who memory?

NA: I was completely obsessed with Doctor Who as a child, and my mother told me that I'd grow out of it. We laugh about that now. I can remember being terrified as a young child by the Axons in a four-part serial called The Claws of Axos, and I can certainly remember the Third Doctor regenerating into the Fourth. That was a big deal—and it was amazing how quickly I accepted and loved the new guy. Soon after that, I met Tom Baker (the Fourth Doctor) when he opened a local school fete. That had a big effect on me. He was lovely, in character, and signed his name "From Who Is Tom Baker?"

Are there any plans for a multiple Doctor story line in the future?

NA: The excellent and rightly esteemed Paul Cornell is writing a Four Doctors miniseries even as I type this, featuring, I believe, the Ninth, Tenth, Eleventh, and Twelfth Doctors, plus various companions including Gabby Gonzalez for the Tenth Doctor.

Did you do any Doctor Who art before becoming part of this project?

SF: I drew the first Doctor for the IDW Prisoners of Time 50th Anniversary celebration story.

Does drawing a comic character based on an actual person present particular challenges?

SF: That rather depends on the person. In the case of Matt Smith...YES! For someone who is so identifiable, he seems almost infinitely malleable. His face is rarely still, and he has tremendous nuance in those deeply hooded eyes. I've been staring at his face for well over a year now and I can't say honestly that I can nail his likeness every single time. It's frustrating and also quite fascinating. I can't fall back on any of my usual shortcuts, so it's never boring.

Eric Norton is Head of Customer Services at McMillan Memorial Library, Wisconsin Rapids, where he has also served as a department head for adult and youth services. He is a longtime reviewer for L.1 and sister publication School Library Journal and a lifelong fan of speculative fiction. He doesn't own a sonic screwdriver replica but he does have a few T-shirts with the TARDIS on them

What's your first Doctor Who memory?

SF: The Sontaran Experiment, which is an early Tom Baker two-episode serial with Harry Sullivan and Sarah Jane Smith. It's such a simple story, with a bare minimum of set and setting, but it completely captivated me.