The Return of the Regenerated: A New 'Doctor Who' 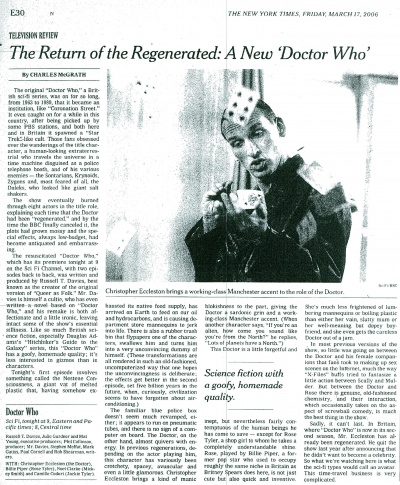 The original "Doctor Who," a British sci-fi series, was on for so long, from 1963 to 1989, that it became an institution, like "Coronation Street." It even caught on for a while in this country, after being picked up by some PBS stations, and both here and in Britain it spawned a "Star Trek"-like cult. Those fans obsessed over the wanderings of the title character, a human-looking extraterrestrial who travels the universe in a time machine disguised as a police telephone booth, and of his various enemies -- the Sontarians, Krynoids, Zygons and, most feared of all, the Daleks, who looked like giant salt shakers.

The show eventually burned through eight actors in the title role, explaining each time that the Doctor had been "regenerated," and by the time the BBC finally canceled it, the plots had grown mossy and the special effects, always low-budget, had become antiquated and embarrassing.

The resuscitated "Doctor Who," which has its premiere tonight at 9 on the Sci Fi Channel, with two episodes back to back, was written and produced by Russell T. Davies, best known as the creator of the original version of "Queer as Folk." Mr. Davies is himself a cultie, who has even written a novel based on "Doctor Who," and his remake is both affectionate and a little ironic, leaving intact some of the show's essential silliness. Like so much British science fiction, especially Douglas Adams's "Hitchhiker's Guide to the Galaxy" series, this "Doctor Who" has a goofy, homemade quality; it's less interested in gizmos than in characters.

Tonight's first episode involves something called the Nestene Consciousness, a giant vat of melted plastic that, having somehow exhausted its native food supply, has arrived on Earth to feed on our oil and hydrocarbons, and is causing department store mannequins to jerk into life. There is also a rubber trash bin that flypapers one of the characters, swallows him and turns him into a very unconvincing dummy of himself. (These transformations are all rendered in such an old-fashioned, uncomputerized way that one hopes the unconvincingness is deliberate; the effects get better in the second episode, set five billion years in the future, when, curiously, civilization seems to have forgotten about air-conditioning.)

The familiar blue police box doesn't seem much revamped, either; it appears to run on pneumatic tubes, and there is no sign of a computer on board. The Doctor, on the other hand, almost quivers with energy. In previous regenerations, depending on the actor playing him, this character has variously been crotchety, spacey, avuncular and even a little glamorous. Christopher Eccleston brings a kind of manic blokishness to the part, giving the Doctor a sardonic grin and a working-class Manchester accent. (When another character says, "If you're an alien, how come you sound like you're from the North?" he replies, "Lots of planets have a North.")

This Doctor is a little forgetful and inept, but nevertheless fairly contemptuous of the human beings he has come to save -- except for Rose Tyler, a shop girl to whom he takes a completely understandable shine. Rose, played by Billie Piper, a former pop star who used to occupy roughly the same niche in Britain as Britney Spears does here, is not just cute but also quick and inventive. She's much less frightened of lumbering mannequins or boiling plastic than either her vain, slutty mum or her well-meaning but dopey boyfriend, and she even gets the careless Doctor out of a jam.

In most previous versions of the show, so little was going on between the Doctor and his female companions that fans took to making up sex scenes on the Internet, much the way "X-Files" buffs tried to fantasize a little action between Scully and Mulder. But between the Doctor and Rose there is genuine, old-fashioned chemistry, and their interaction, which occasionally takes on the aspect of screwball comedy, is much the best thing in the show.

Sadly, it can't last. In Britain, where "Doctor Who" is now in its second season, Mr. Eccleston has already been regenerated. He quit the show last year after announcing that he didn't want to become a celebrity. So what we're watching here is what the sci-fi types would call an avatar. This time-travel business is very complicated.

CORRECTION: A television review in Weekend on March 17 about "Doctor Who," on the Sci Fi channel, misstated the number of actors who played the title role in the original BBC series from 1963 to 1989. (The error also occurred in an article in Arts & Leisure on March 5.) It was seven actors, not eight.

The review also referred imprecisely to the reason the Nestene Consciousness, a life form from another planet, sought a new source of food, and it misstated the composition of a trash bin that swallowed a character. The life form's protein planets were destroyed; it did not exhaust its food supply. The bin was plastic, not rubber.

GRAPHIC: Photo: Christopher Eccleston brings a working-class Manchester accent to the role of the Doctor. (Photo by Sci Fi/BBC)