The Solid Gold Girl Comes Back

From The Doctor Who Cuttings Archive
Revision as of 17:35, 31 July 2017 by John Lavalie (talk | contribs) (John Lavalie moved page It's ten years since "golden girl" Wanda Ventham was last in Dr. Who to The Solid Gold Girls Comes Back)
(diff) ← Older revision | Latest revision (diff) | Newer revision → (diff)
Jump to navigationJump to search 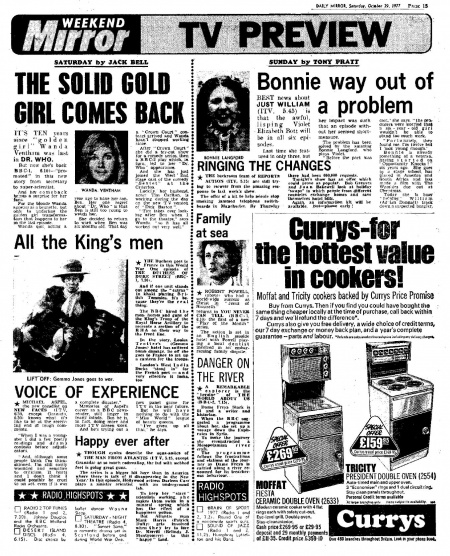 IT'S TEN years since "golden girl" Wanda Ventham was last in DR. WHO.

And her comeback bring a surprise for her fans.

For the blonde Wanda appears as a brunette, but only to underline the golden girl transformation that happens to her in the last episode.

Wanda quit acting a year ago to have her son, Ben. Her one regret about "Dr. Who" is that Ben is still too young to watch her.

She decided to return to work when Ben was six months old. That day a "Crown Court" contract arrived and Wanda hasn't stopped working since.

After "Crown Court" she did a try-out show for a comedy series, then a BBC-2 play which, in turn, led to her Dr. Who appearance.

And she has just joined the West End stage cast of the comedy "Sextet" at the Criterion.

Luckily, her husband, actor Tim Carlton, is working during the day on the new T V version of "Dick Barton".

"Tim takes over looking after Ben when I go to the theatre," says Wanda. "So it has all worked out very well."