The Tardis Through Time 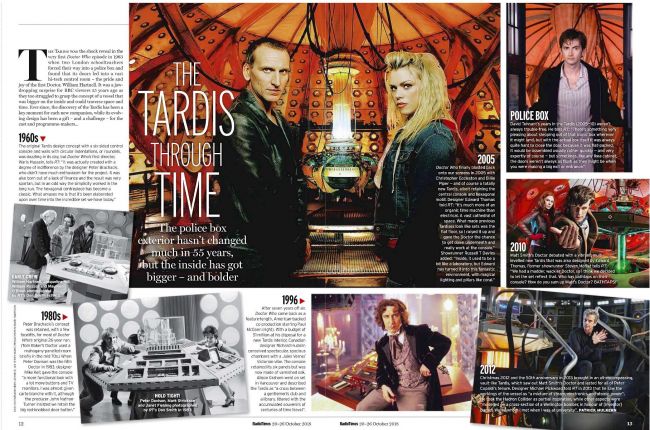 The police box exterior hasn't changed much in 55 years, but the inside has got bigger - and bolder

THE TARDIS WAS the shock reveal in the very first Doctor Who episode in 1963 when two London schoolteachers forced their way into a police box and found that its doors led into a vast hi-tech control room - the pride and joy of the first Doctor, William Hartnell. It was a jaw-dropping surprise for BBC viewers 55 years ago as they too struggled to grasp the concept of a vessel that was bigger on the inside and could traverse space and time. Ever since, the discovery of the Tardis has been a key moment for each new companion, while its evolving design has been a gift - and a challenge - for the cast and programme-makers...

The original Tardis design concept with a six-sided control console and walls with circular indentations, or roundels, was dazzling in its day, but Doctor Who's first director, Waris Hussein, tells RT: "It was actually created with a degree of indifference by the designer Peter Brachacki, who didn't have much enthusiasm for the project. It was also born out of a lack of finance and the result was very spartan, but in an odd way the simplicity worked in the long run. The hexagonal centrepiece has become a classic. What amuses me is that it's been elaborated upon over time into the incredible set we have today."

Peter Brachacki's concept was retained, with a few facelifts, for most of Doctor Who's original 26-year run. (Tom Baker's Doctor used a mahogany-panelled room briefly in the mid 70s.) When Peter Davison was the fifth Doctor in 1983, designer Mike Kelt gave the console "a more functional look with a lot more buttons and TV monitors. I was almost given carte blanche with it, although the producer John Nathan-Turner insisted we retain the big red-knobbed door button."

After seven years off air, Doctor Who came back as a feature-length, American-backed co-production starring Paul McGann (right). With a budget of $1 million at his disposal for a new Tardis interior, Canadian designer Richard Hudolin conceived spectacular, spacious chambers with a Jules Verne/ Victorian vibe. The console retained its six panels but was now made of varnished oak. Alison Graham went on set in Vancouver and described the Tardis as "a cross between a gentlemen's club and a library, littered with the accumulated souvenirs of centuries of time travel".

Doctor Who finally blasted back onto our screens in 2005 with Christopher Eccleston and Billie Piper - and of course a totally new Tardis, albeit retaining the central console and hexagonal motif. Designer Edward Thomas told RT: "It's much more of an organic time machine than electrical. A vast cathedral of space. What made previous Tardises look like sets was the flat floor, so I raised it up and gave the Doctor the chance to get down underneath and really work at the console." Showrunner Russell T Davies added: "Inside, it used to be a bit like a laboratory, but Edward has turned it into this fantastic environment, with magical lighting and pillars like coral."

David Tennant's years in the Tardis (2005-10) weren't always trouble-free. He tells RT: "There's something very pleasing about stepping out of that iconic box wherever it might land, but with the actual box itself it was always quite hard to close the door, because it was flat-packed. It would be assembled usually rather quickly - and very expertly of course - but sometimes, like any Ikea cabinet, the doors weren't always as flush as they might be when you were making a big exit or entrance."

Matt Smith's Doctor debuted with a vibrant, multi-levelled new Tardis that was also designed by Edward Thomas. Former showrunner Steven Moffat tells RT: "We had a madder, wackier Doctor, so I think we decided to let the set reflect that. Who has bathtaps on their console? How do you sum up Matt's Doctor? BATHTAPS!"

Christmas 2012 and the 50th anniversary in 2013 brought in an all-encompassing, vault-like Tardis, which saw out Matt Smith's Doctor and lasted for all of Peter Capaldi's tenure. Designer Michael Pickwoad told RT in 2013 that he saw the workings of the vessel as "a mixture of steam, electronics and atomic power". He took the Hadron Collider as partial inspiration, while other aspects were "modelled On a cross-section of a Wellington bomber, in honour of [inventor] Barnes Wallis, whom I met when I was at university".