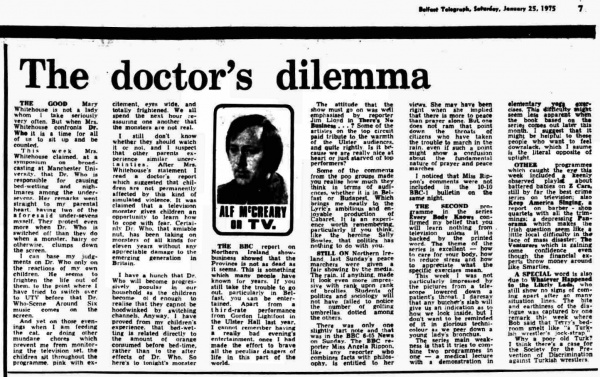 THE GOOD Mary Whitehouse is not a lady whom I take seriously very often. But when Mrs. Whitehouse confronts Dr. Who it is a time for all of us to sit up and be counted.

This week Mrs. Whitehouse claimed, at a symposium on broadcasting at Manchester University, that Dr. Who is responsible for causing bed-wetting and nightmares among the under-sevens. Her remarks went straight to my parental heart, having two of the aforesaid under-sevens myself. They protest even more when Dr. Who is switched off than they do when a monster, hairy or otherwise, clumps down the screen.

I can base my judgments on Dr. Who only on the reactions of my own children. He seems to frighten the life out of them, to the point where I have tried to switch over to UTV before that Dr. Who-Scene Around Six music comes on the screen.

And yet on those evenings when I am feeding the cat, or doing other mundane chores which prevent me from monitoring the television set, the children sit throughout the programme, pink with excitement, eyes wide, and totally frightened. We all spend the next hour reassuring one another that the monsters are not real.

I still don't know whether they should watch it or not, and I suspect that other parents experience similar uncertainties. After Mrs. Whitehouse's statement I read a doctor's report which suggested that children are not permanently affected by this kind of simulated violence. It was claimed that a television monster gives children an opportunity to learn how to cope with fear. Certainly Dr. Who, that amiable nut, has been taking on monsters of all kinds for eleven years without any appreciable damage to the emerging generation in Britain.

I have a hunch that Dr. Who will become progressively popular in our household as the children become d enough to realise that they cannot be hoodwinked by switching channels. Anyway. I have proved from my children's experience, that bed-wetting is related directly to the amount of orange consumed before bed-time, rather than to the after effects of Dr. Who. So here's to tonight's monster.