The good Doctor triumphed once again 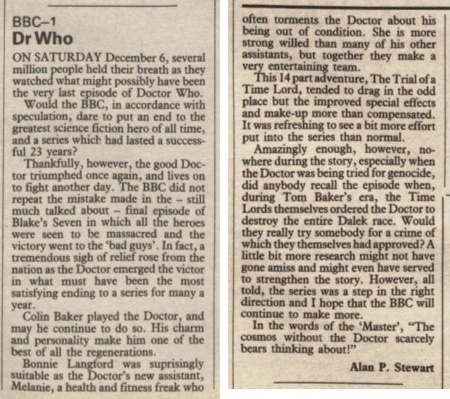 ON SATURDAY December 6, several million people held their breath as they watched what might possibly have been the very last episode of Doctor Who. Would the BBC, in accordance with speculation, dare to put an end to the greatest science fiction hero of all time, and a series which had lasted a successful 23 years?

Thankfully, however, the good Doctor triumphed once again, and lives on to fight another day. The BBC did not repeat the mistake made in the — still much talked about — final episode of Blake's Seven in which all the heroes were seen to be massacred and the victory went to the 'bad guys'. In fact, a tremendous sigh of relief rose from the nation as the Doctor emerged the victor in what must have been the most satisfying ending to a series for many a year.

Colin Baker played the Doctor, and may he continue to do so. His charm and personality make him one of the best of all the regenerations.

Bonnie Langford was suprisingly suitable as the Doctor's new assistant, Melanie, a health and fitness freak who often torments the Doctor about his being out of condition. She is more strong willed than many of his other assistants, but together they make a very entertaining team.

This 14 part adventure, The Trial of a Time Lord, tended to drag in the odd place but the improved special effects and make-up more than compensated. It was refreshing to see a bit more effort put into the series than normal. Amazingly enough, however, nowhere during the story, especially when the Doctor was being tried for genocide, did anybody recall the episode when, during Tom Baker's era, the Time Lords themselves ordered the Doctor to destroy the entire Dalek race. Would they really try somebody fora crime of which they themselves had approved? A little bit more research might not have gone amiss and might even have served to strengthen the story. However, all told, the series was a step in the right direction and I hope that the BBC will continue to make more.

In the words of the 'Master', "The cosmos without the Doctor scarcely bears thinking about!"