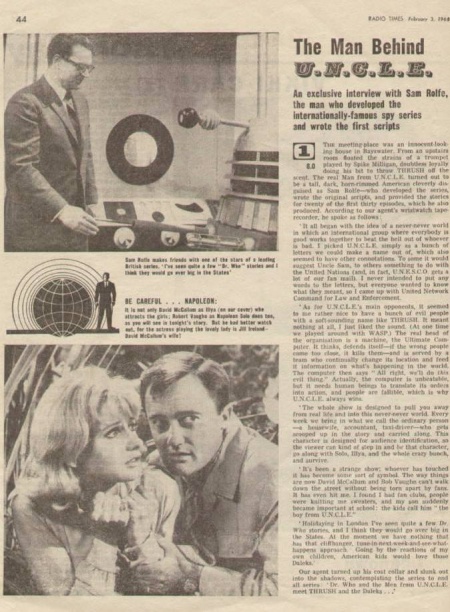 An exclusive interview with Sam Rolfe, the man who developed the internationally famous spy series and wrote the first scripts

The meeting-place was an innocent looking house in Bayswater. From an upstairs room floated the strains of the trumpet played by Spike Milligan, doubtless loyalty doing his bit to throw THRUSH off the scent. The real Man from U.N.C.L.E. turned out to be a tall, dark, horn-rimmed American cleverly disguised as Sam Rolfe-- who developed the series, wrote the original scripts, and provided the stories for twenty of the first thirty episodes, which he also produced. According to our agents wristwatch tape-recorder, he spoke as follows:

"It all began with the idea of a never-never world in which an intellectual group where everybody it is good works together to beat the hell out of whoever is bad. I picked U.N.C.L.E. simply as a bunch of letters we could make a name out of, which also seem to have other connotations. To some it would suggest Uncle Sam, to others something to do with the United Nations (and, in fact, U.N.E.S.C.O. gets a lot of our fan mail). I never intended to put any words to the letters, but everyone wanted you know what they meant, so I came up with United Network Command for Law Enforcement.

"As for U.N.C.L.E.s main opponents, it seemed to me rather nice to have a bunch of evil people with soft sounding names like THRUSH. It meant nothing at all, I'd just like the sound. At one time we played around with WASP.) The real head of the organization is a machine, the ultimate computer. It thinks, defends itself if the wrong people come too close, it kills them and is served by a team who continually change its location and feed it information on what's happening in the world. The computer then says "All right, we'll do this evil thing." Actually, the computer is unbeatable, but it needs human beings to translate its orders into action, and people are fallible, which is why U.N.C.L.E. always wins.

"The whole show was designed to pull you away from real life and into this never-never world. Every week we bring in what we call the ordinary person-- a housewife, accountant, taxi-driver-- who gets scooped up in the story and carried along. This character is designed for audience identification, so the viewer can kind of step in and be that character, go along with solo, Illya, and the whole crazy bunch, and survive.

"It's been a strange show; whoever has touched it has become some sort of symbol. The way things are now David McCallum and Bob Vaughan can't walk down the street without being torn apart by fans. It is even hit me. I found I had fan clubs, people were knitting the sweaters, and my son suddenly became important at school: the kids call him the boy from U.N.C.L.E.

"Holidaying in London I've seen quite a few Dr. Who stories, and I think they would go over big in the states. At the moment we have nothing that has that cliffhanger, tune-in-next-week-and-see-what-happens approach. Going by the reactions of my own children, American kids would love those Daleks.

Our agent turned up his coat collar and slunk out into the shadows, contemplating the series to end all series "Dr. Who and the Men from U.N.C.L.E. meet THRUSH and the Daleks..."

Caption: Be careful Napoleon: it is not only David MCallum as Illya (on our cover) who attracts the girls; Robert Vaughn as Napoleon Solo does too, as you'll see in tonight's story. But he had better watch out, for the actress playing the lovely lady is Jill Ireland David McCallum's wife!

Caption: Sam Rolfe makes friends with one of the new stars of a leading British series. "I've seen quite a few Dr. Who stories and I think they would go over big in the States."