The new Doctor is sad to leave his mates 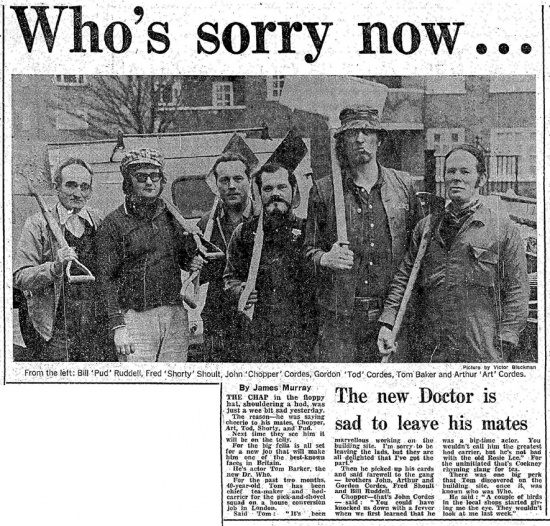 THE CHAP in the floppy hat; shouldering a hod, was just a wee bit, sad yesterday. The reason—he was saying cheerio to his mates, Chopper, Art, Tod, Shorty, and Pud.

Next time they see him it will be on the telly.

For the big fella is all set for a new job that will make him one of the best-known faces in Britain.

For the past two months, 40-year-old, Tom has been chief tea-maker and hod-carrier for, the pick-and-shovel squad on. a house conversion job in London.

Said Tom: "It's been marvellous working on the building site. I'm. sorry, to be leaving the lads, but they are all delighted that I've got the part."

Then he picked up his cards and said farewell to the gang — brothers John, Arthur and Gordon Cordes, Fred Shoult and Bill Ruddell.

Chopper—that's John Cordes -said : "You could have knocked us down with a fevver when we first learned-that he was a big-time actor. You wouldn't call him the greatest hod carrier, but he's not bad with the old Rosie Lee." For the uninitiated that's Cockney rhyming slang for tea.

There was one big perk that Tom discovered on the building site, once it was known who was Who.

He said: "A couple of birds in the local shops started giving me the eye. They wouldn't look at me last week."