The return of a science fiction great

From The Doctor Who Cuttings Archive
Revision as of 22:24, 13 May 2014 by John Lavalie (talk | contribs)
(diff) ← Older revision | Latest revision (diff) | Newer revision → (diff)
Jump to navigationJump to search 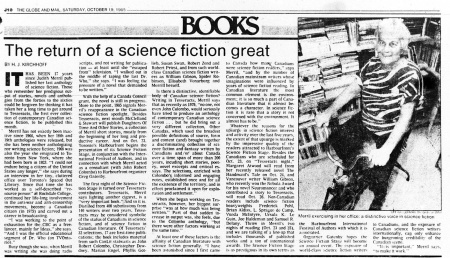 IT HAS BEEN 17 years since Judith Merril published her last anthology of science fiction. Those who remember her prodigious output of stories, novels and anthologies from the forties to the sixties could be forgiven for thinking it has taken her a long time to get around to Tesseracts, the first ever collection of contemporary Canadian science fiction, to be published this month.

Merril has not exactly been inactive since 1968, when her 18th and 19th anthologies were released, but she has been neither anthologizing nor writing science fiction; 1968 was also the year she emigrated to Toronto from New York, where she had been born in 1923. "I could not endure being a citizen of the United States any longer," she says during an interview in her tiny, cluttered office over Toronto's Spaced Out Library. Since that time she has worked as a self-described "resource person" at Rochdale College, continued her life-long involvement in the anti-war and anticensorship movements, become a Canadian citizen (in 1975) and carved out a career in broadcasting. "I was working to the point of exhaustion for the CBC as a freelancer, mainly for Ideas," she says. "And I was the official educational segment of Dr. Who (on TVOntario)." Busy though she was, when Merill was writing she was doing radio scripts, and not writing for publication - at least until she "escaped from" television. "I walked out in the middle of taping the last Dr. Who," she says. "I was feeling the pressure of a novel that demanded to be written." With the help of a Canada Council grant, the novel is still in progress. More to the point, 1985 signals Merril's reappearance in the Canadian science fiction spotlight. Besides Tesseracts, next month McClelland & Stewart will publish Daughters Of Time And Other Stories, a collection of Merril short stories, mostly from the beginning of her long and productive career. And on Oct. 23, Toronto's Harbourfront begins the presentation of its Science Fiction Stage, in conjunction with the International Festival of Authors, and in connection with which Merril acted as a consultant (with John Robert Colombo) to Harbourfront organizer Greg Gatenby.

The first night of the Science Fiction Stage is turned over Tesseracts contributors. Tesseracts, Merril says lighting another cigaret, is a "very important book." And so it is. Distilled from 400 submissions from 140 writers over two years, Tesseracts may be considered symbolic of the status of Canadians in science fiction, and of science fiction in Canadian literature. Of Tesseracts' 32 selections, 17 are first-time publications; the book includes material from such CanLit stalwarts as John Robert Colombo, Christopher Dewdney, Marian Engel, Phyllis Gotlieb, Susan Swan, Robert Zend and Robert Priest, and from such worldclass Canadian science fiction writers as William Gibson, Spider Robinson, Elisabeth Vonarburg and Merrill herself.

Is there a distinctive, identifiable body of Canadian science fiction? Writing in Tesseracts, Merril says that as recently as 1979, "no one, not even John Colombo, would seriously have tried to produce an anthology of contemporary Canadian science fiction ... but he did bring out a very different collection, Other Canadas, which used the broadest possible definitions of source, form and content (and) brought together a discriminating collection of science fiction and fantasy written by Canadians and/or about Canada over a time span of more than 200 years, incuding short stories, poetry, novel excerpts and critical essays. The selections, enriched with Colombo's informed and engaging notes, established once and for all the existence of the territory, and in effect proclaimed it open for exploration and settlement." When she began working on Tesseracts, however, her biggest surprise "was at how much was being written." Part of that sudden increase in output was, she feels, due to the Colombo anthology, "but there were other factors working at the same time." At least one of these factors is the affinity of Canadian literature with science fiction generally. "I have been astonished since I first came to Canada how many Canadians were science fiction readers," says Merril, "and by the number of Canadian mainstram writers whose imaginations were influenced by years of science fiction reading. In Canadian literature the most common element is the environment; it is so much a part of Canadian literature that it almost becomes a character. In science fiction it is rare that a story is not concerned with the environment. It almost has to be." Whatever the reasons for the upsurge in science fiction interest and activity over the last five years, the extent of that upsurge is marked by the impressive quality of the readers attracted to Harbourfront's Science Fiction Stage. Besides the Canadians who are scheduled for Oct. 23, on "Tesseracts night," Margaret Atwood will read from her recently released novel The Handmaid's Tale on Oct. 24, and Vancouver writer William Gibson, who recently won the Nebula Award for his novel Neuromancer and who contributed a story to Tesseracts, will read Oct. 26. Non-Canadian readers include science fiction heavyweights Frederick Pohl, Brian Aldiss, L. Sprague de Camp, Vonda McIntyre, Ursula K. Le Guin, Joe Haldeman and Samuel R. Delany. Throw in Merril's two nights of reading (Oct. 23 and 25) , and we are talking of a line-up that includes thousands of published works and a ton of international awards. The Science Fiction Stage is as prestigious in its own terms as the Harbourfront International Festival of Authors with which it is associated.