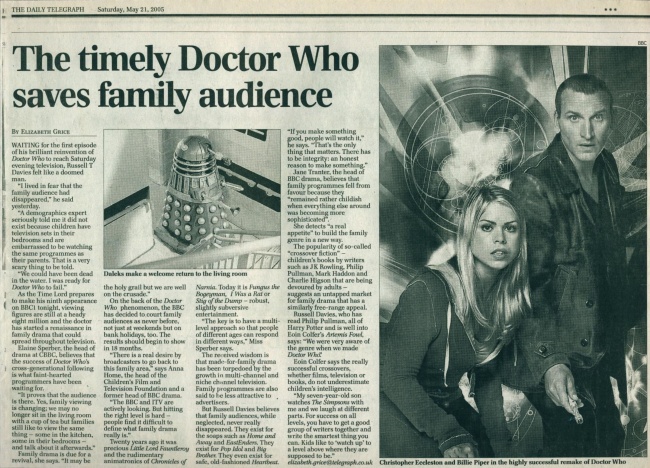 WAITING for the first episode of his brilliant reinvention of Doctor Who to reach Saturday evening television, Russell T Davies felt like a doomed man.

"I lived in fear that the family audience had disappeared," he said yesterday.

"A demographics expert seriously told me it did not exist because children have television sets in their bedrooms and are embarrassed to be watching the same programmes as their parents. That is a very scary thing to be told.

"We could have been dead in the water. I was ready for Doctor Who to fail."

As the Time Lord prepares to make his ninth appearance on BBC1 tonight, viewing figures are still at a heady eight million and the doctor has started a renaissance in family drama that could spread throughout television.

Elaine Sperber, the head of drama at CBBC, believes that the success of Doctor Who's cross-generational following is what faint-hearted programmers have been waiting for.

"It proves that the audience is there. Yes, family viewing is changing; we may no longer sit in the living room with a cup of tea but families still like to view the same thing — some in the kitchen, some in their bedrooms —and talk about it afterwards."

Family drama is due for a revival, she says. "It may be the holy grail but we are well on the crusade."

On the back of the Doctor Who phenomenon, the BBC has decided to court family audiences as never before, not just at weekends but on bank holidays, too. The results should begin to show in 18 months.

"There is a real desire by broadcasters to go back to this family area," says Anna Home, the head of the Children's Film and Television Foundation and a former head of BBC drama.

"The BBC and ITV are actively looking. But hitting the right level is hard —people find it difficult to define what family drama really is."

Twenty years ago it was precious Little Lord Fauntleroy and the rudimentary animatronics of Chronicles of Narnia. Today it is Fungus the Bogeyman, I Was a Rat or Stilt of the Dump - robust, slightly subversive entertainment.

"The key is to have a multilevel approach so that people of different ages can respond in different ways," Miss Sperber says.

The received wisdom is that made-for-family drama has been torpedoed by the growth in multi-channel and niche channel television. Family programmes are also said to he less attractive to advertisers.

But Russell Davies believes that family audiences, while neglected, never really disappeared. They exist for the soaps such as Home and Away and EastEnders. They exist for Pop Idol and Big Brother. They even exist for safe, old-fashioned Heartbeat. "If you make something good, people will watch it," he says. "That's the only thing that matters. There has to be integrity: an honest reason to make something."

Jane Tranter, the head of BBC drama, believes that family programmes fell from favour because they "remained rather childish when everything else around was becoming more sophisticated".

She detects "a real appetite" to build the family genre in a new way.

The popularity of so-called "crossover fiction" —children's books by writers such as JK Rowling, Philip Pullman, Mark Haddon and Charlie Higson that are being devoured by adults —suggests an untapped market for family drama that has a similarly free-range appeal.

Russell Davies, who has read Philip Pullman, all of Harry Potter and is well into Eoin Coffer's Artemis Fowl, says: "We were very aware of the genre when we made Doctor Whd

"My seven-year-old son watches The Simpsons with me and we laugh at different parts. For success on all levels, you have to get a good group of writers together and write the smartest thing you can. Kids like to 'watch up' to a level above where they are supposed to be." elizabeth.grice@telegraph.co.uk

Caption: Christopher Eccleston and Billie Piper in the highly successful remake of Doctor Who