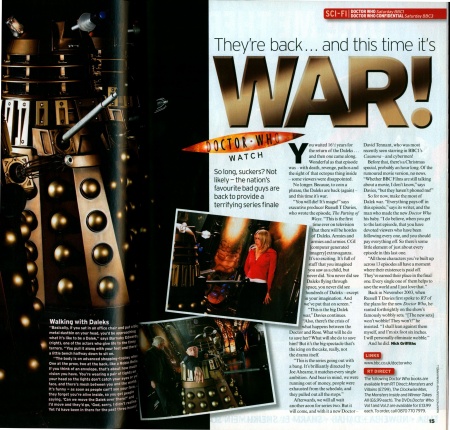 "Basically, if you sat in an office chair and put a big metal dustbin on your head, you'd be approaching what it's like to be a Dalek," says Barnaby Edwards (right), one of the actors who give life to the tinny terrors. You pull it along with your feet and there a little bench halfway down to sit on.

"The body is on advanced shopping-trolley wheel. One at the prow, two at the back, like a Robin Reliant. If you think of an envelope, that's about how much vision you have. You're wearing a pair of tights on your head so the lights don't catch your eyes or your face, and there's mesh between you and the world. It's funny — as soon as people can't see your face,' they forget you're alive inside, so you get people saying, Can we move the Dalek over there?' and I'd move and they'd go, 'God, sorry, I didn't realise; Yet I'd have been in there for the past three hours"

So long, suckers? Not likely — the nation's favourite bad guys are back to provide a terrifying series finale

You waited 16 1/2 years for the return of the Daleks ... and then one came along. Wonderful as that episode was - with death, revenge, pathos and the sight of that octopus thing inside - some viewers were disappointed.

No longer. Because, to coin a phrase, the Daleks are back (again) - and this time it's war.

"You will die! It's magic!" says executive producer Russell T Davies, who wrote the episode, The Parting of Ways. "This is the first time ever on television that there will be hordes of Daleks. Armies and armies and armies. CGI computer generated imagery] extravaganza. It's so exciting. It's full of stuff that you imagined you saw as a child, but never did. You never did see Daleks flying through space, you never did see hundreds of Daleks - except in your imagination. And we've put that on screen." "This is the big Dalek war," Davies continues. Also, there's the crisis of what happens between the Doctor and Rose. What will he do to save her? What will she do to save him? But it's the big spectacle that's the icing on the cake, really, not the drama itself.

"This is the series going out with a bang. It's brilliantly directed by Joe Ahearne, it matches every single ambition. And bear in mind, we were running out of money, people were exhausted from the schedule, and they pulled out all the stops."

Afterwards, we will all wait another aeon for series two. But it will come, and with it a new Doctor - David Tennant, who was most recently seen starring in BBC 1's Casanova - and cybermen!

Before that, there's a Christmas special, probably an hour long. Of the rumoured movie version, no news. "Whether BBC Films are still talking about a movie, I don't know," says Davies, "but they haven't phoned me!"

So for now, make the most of Dalek war. "Everything pays off in this episode," says its writer, and the man who made the new Doctor Who his baby. "I do believe, when you get to the last episode, that you have devoted viewers who have been following every one, and you should pay everything off. So there's some little element of just about every episode in this last one.

"All those characters you've built up across 13 episodes all have a moment where their existence is paid off. They've earned their place in the final one. Every single one of them helps to save the world and I just love that."

Back in November 2003, when Russell T Davies first spoke to RT of the plans for the new Doctor Who, he ranted forthrightly on the show's famously wobbly sets. "[The new sets] won't wobble! They won't!" he insisted. "I shall lean against them myself, and I'm six foot six inches. I will personally eliminate wobble."