Time lord gets mojo back with new sidekick 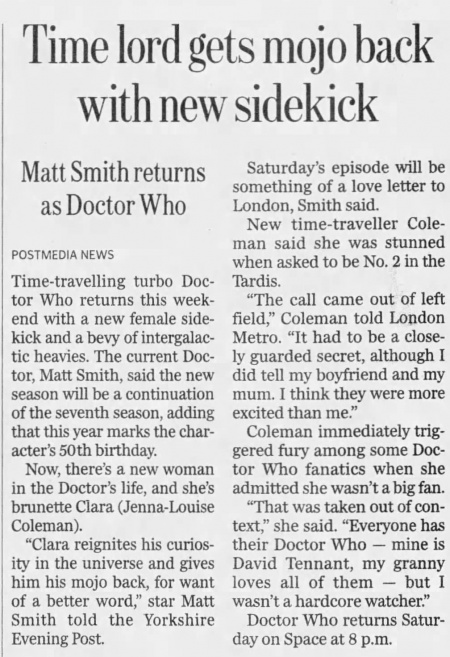 Matt Smith returns as Doctor Who

Time-travelling turbo Doctor Who returns this weekend with a new female sidekick and a bevy of intergalactic heavies. The current Doctor, Matt Smith, said the new season will be a continuation of the seventh season, adding that this year marks the character's 50th birthday.

"Clara reignites his curiosity in the universe and gives him his mojo back, for want of a better word," star Matt Smith told the Yorkshire Evening Post.

Saturday's episode will be something of a love letter to London, Smith said.

New time-traveller Coleman said she was stunned when asked to be No. 2 in the Tardis.

"The call came out of left field," Coleman told London Metro. "It had to be a closely guarded secret, although I did tell my boyfriend and my mum. I think they were more excited than me."

Coleman immediately triggered fury among some Doctor Who fanatics when she admitted she wasn't a big fan.

"That was taken out of context," she said. "Everyone has their Doctor Who — mine is David Tennant, my granny loves all of them — but I wasn't a hardcore watcher?'

Doctor Who returns Saturday on Space at 8 p.m.