Difference between revisions of "Time shift!" 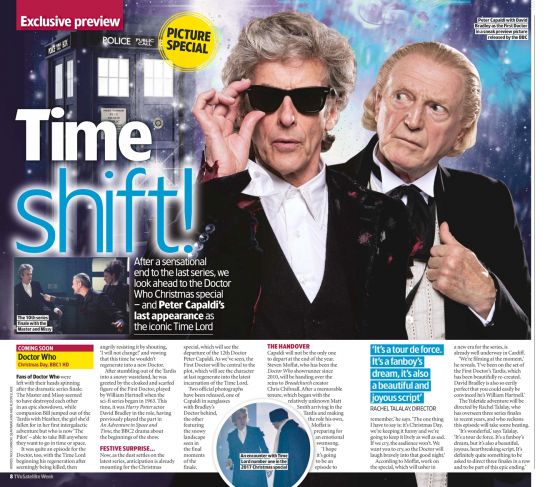 After a sensational end to the last series, we look ahead to the Doctor Who Christmas special and Peter Capaldi's last appearance as the iconic Time Lord

Fans of Doctor Who were left with their heads spinning after the dramatic series finale. The Master and Missy seemed to have destroyed each other in an epic showdown, while companion Bill jumped out of the Tardis with Heather, the girl she'd fallen for in her first intergalactic adventure but who is now 'The Pilot' — able to take Bill anywhere they want to go in time or space.

It was quite an episode for the Doctor, too, with the Time Lord beginning his regeneration after seemingly being killed, then angrily resisting it by shouting, I will not change!' and vowing that this time he wouldn't regenerate into a new Doctor.

After stumbling out of the Tardis into a snowy wasteland, he was greeted by the cloaked and scarfed figure of the First Doctor, played by William Hartnell when the sci-fi series began in 1963. This time, it was Harry Potter actor David Bradley in the role, having previously played the part in An Adventure in Space and Time, the BBC2 drama about the beginnings of the show.

Now, as the dust settles on the latest series, anticipation is already mounting for the Christmas special, which will see the departure of the 12th Doctor Peter Capaldi. As we've seen, the First Doctor will be central to the plot, which will see the character at last regenerate into the latest incarnation of the Time Lord.

Two official photographs have been released, one of Capaldi in sunglasses with Bradley's Doctor behind, the other featuring the snowy landscape seen in the final moments of the finale.

Capaldi will not be the only one to depart at the end of the year. Steven Moffat, who has been the Doctor Who showrunner since 2010, will be handing over the reins to Broadchurch creator Chris Chibnall. After a memorable tenure, which began with the relatively unknown Matt Smith arriving in the Tardis and making the role his own, Moffat is preparing for an emotional swansong.

'I hope it's going to be an episode to remember,' he says. The one thing I have to say is: it's Christmas Day, we're keeping it funny and we're going to keep it lively as well as sad. If we cry, the audience won't. We want you to cry, so the Doctor will laugh bravely into that good night:

According to Moffat, work on the special, which will usher in a new era for the series, is already well underway in Cardiff.

'We're filming at the moment,' he reveals. I've been on the set of the First Doctor's Tardis, which has been beautifully re-created. David Bradley is also so eerily perfect that you could easily be convinced he's William Hartnell:

The Yuletide adventure will be directed by Rachel Talalay, who has overseen three series finales in recent years, and who reckons this episode will take some beating.

It's wonderful,' says Talalay. It's a tour de force. It's a fanboy's dream, but it's also a beautiful, joyous, heartbreaking script. It's definitely quite something to be asked to direct three finales in a row and to be part of this epic ending.'

An encounter with Time Lord number one in the

The 10th series finale with the Master and Missy