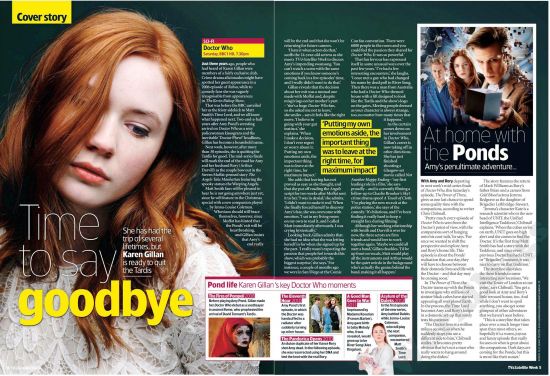 She has had the trip of several lifetimes, but Karen Gillan is ready to quit the Tardis

Just three years ago, people who had heard of Karen Gillan were members of a fairly exclusive club. Crime drama aficionados might have spotted her guest appearance in a 2006 episode of Rebus, while to comedy fans she was vaguely recognisable from appearances in The Kevin Bishop Show.

That was before the BBC unveiled her as the feisty sidekick to Matt Smith's Time Lord, and we all know what happened next. Two-and-a-half years after Amy Pond's arresting arrival on Doctor Who as a sexy policewoman kissogram and the inevitable 'Doctor Phew!' headlines, Gillan has become a household name.

Next week, however, after more than 30 episodes, she is quitting the Tardis for good. The mid-series finale will mark the end of the road for Amy and her husband Rory (Arthur Darvill) as the couple bow out in the Steven Moffat-penned story The Angels Take Manhattan featuring the spooky statues the Weeping Angels.

Matt Smith fans will be pleased to hear he is not going anywhere just yet, since he will feature in the Christmas special with a new companion played by Jenna-Louise Coleman.

Whovians should still brace themselves, however, since Moffat has hinted that the Ponds' exit will be heartbreaking, and Gillan insists that Amy's end really will be the end and that she won't be returning for future cameos.

'I hate it when actors do that,' scoffs the 24-year-old actress as she meets TV&Satellite Week to discuss Amy's impending swansong. 'You can't watch a scene with the same emotions if you know someone's coming back in a few episodes' time, and I really didn't want to do that:

Gillan reveals that the decision about her exit was a mutual one made with Moffat and, despite misgivings on her mother's part — 'she's a huge Doctor Who fan, so she asked me not to leave, she smiles — says it feels like the right move. 'I believe in going with your gut instinct; she explains. 'When I make a decision, I don't ever regret or worry about it. Putting my own emotions aside, the important thing was to leave at the right time, for maximum impact.'

She adds that leaving has not proved as easy as she thought, and that she put off reading the Angels script for two weeks after Moffat sent it to her. 'I was in denial, she admits. 'I didn't want to make it real: When she finally forced herself to discover Amy's fate, she was overcome with emotion. 'I sat in my living room on my own to read it, and I called Matt immediately afterwards. I was crying hysterically.'

Looking back, Gillan admits that she had no idea what she was letting herself in for when she signed up for the part. 'I really wasn't expecting the passion that people feel towards this show, which was probably the biggest surprise; she says. 'For instance, a couple of months ago we were in San Diego at the Comic Con fan convention. There were 6000 people in the room and you could feel the passion they shared for Doctor Who. It was so powerful.'

That fan fervour has expressed itself in some unusual ways over the past few years. 'I've had a few interesting encounters, she laughs. 'I once met a guy who had changed his name by deed poll to River Song. Then there was a man from Australia who had a Doctor Who-themed house with a lift designed to look like the Tardis and the show's logo on the gates. Meeting people dressed as your character is always strange, too, no matter how many times that it happens.'

As the curtain comes down on her involvement in Doctor Who, Gillan's career is now taking off in other directions. She has just finished shooting a Glasgow-set movie called Not Another Happy Ending—'my first leading role in a film; she says proudly — and is currently filming a follow-up to Charlie Brooker's Sky1 crime drama spoof A Touch of Cloth. 'I'm playing the new recruit at the police station,' she says of the comedy. 'It's hilarious, and I've been finding it really hard to keep a straight face during filming.'

Although her working relationship with Smith and Darvill is over for now, the three actors are firm friends and would love to work together again. 'Maybe we could all start a band; Gillan chuckles. 'I'd be up front on vocals, Matt would play all the instruments and Arthur would be the quiet weirdo in the background who's actually the genius behind the band, making it all happen.'

At home with the Ponds

With Amy and Rory departing in next week's mid-series finale of Doctor Who, this Saturday's episode, The Power of Three, gives us one last chance to spend some quality time with the companions, according to writer Chris Chibnall.

'Pretty much every episode of Doctor Who is seen from the Doctor's point of view, with the companions sort of hanging onto his coat-tails, he says. 'For once we wanted to shift the perspective and explore Amy and Rory's home life. This episode is about the Ponds' realisation that, one day, they will have to choose between their domestic lives and life with the Doctor — and that day may be coming soon.'

In The Power of Three, the Doctor teams up with the Ponds to investigate why millions of sinister black cubes have started appearing all over planet Earth. In the process, the Time Lord becomes Amy and Rory's lodger in a domestic set-up that sorely tests his patience.

'The Doctor lives at a million miles a second, so when he suddenly stops you see a different side to him, Chibnall smiles. 'It becomes pretty obvious that he's not a man who really wants to hang around doing the dishes.'

The story features the return of Mark Williams as Rory's father Brian and a cameo from Cold Blood actress Jemma Redgrave as the daughter of Brigadier Lethbridge-Stewart.

'Jemma's character Kate is a research scientist who is the new head of UNIT, the Unified Intelligence Taskforce; Chibnall explains. 'When the cubes arrive on earth, UNIT goes on high alert and she comes to find the Doctor. It's the first time Matt Smith has had a story with the Taskforce, and since every previous Doctor has had a UNIT or "Brigadier" moment, it was nice to carry on that tradition.'

The storyline also takes the three friends to some interesting new locations. 'We visit the Tower of London at one point; says Chibnall. 'You get a good look at Amy and Rory's little terraced house, too. And while I don't want to spoil anything, you also get some glimpses of other adventures that we haven't seen before.

'This is a storyline that takes place over a much longer time span than most others, so hopefully it's a warm, joyous and funny episode that really focuses on what is great about the companions. Dark days are coming for the Ponds, but this is more like their sunset.'

Before playing Amy Pond, Gillan made her Doctor Who debut as a soothsayer in ancient Rome, who prophesied the arrival of David Tennant's Tardis.

Amy Pond's first episode, in which the Doctor was handcuffed to a radiator after suddenly turning up at her house.

An Auton duplicate of her fiancé Rory shot Amy dead. In the following episode, she was resurrected using her DNA and tied the knot with the real Rory.

Imprisoned by Madame Kovarian (Frances Barber), Amy gave birth to baby Melody who, it was revealed, would grow up to be River Song (Alex Kingston).

In the first episode of the new series, Amy battled Daleks while Jenna-Louise Coleman, who will play the next companion, encountered Matt Smith's Time Lord.