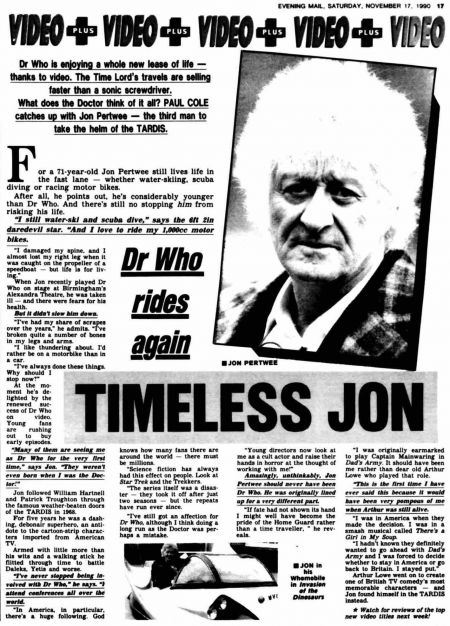 Dr Who is enjoying a whole new lease of life - thanks to video. The Time Lord's travels are selling faster than a sonic screwdriver. What does the Doctor think of it all? PAUL COLE catches up with Jon Pertwee – the third man to take the helm of the TARDIS.

For a 71-year-old Jon Pertwee still lives life in the fast lane – whether water-skiing, scuba diving or racing motor bikes.

After all, he points out, he's considerably younger than Dr Who. And there's still no stopping him from risking his life.

"I still water-ski and scuba dive," says the oft 2in daredevil star. "And I love to ride my 1,000cc motor bikes.

"I damaged my spine, and I almost lost my right leg when it was caught on the propeller of a speedboat - but life is for living."

When Jon recently played Dr Who on stage at Birmingham's Alexandra Theatre, he was taken ill - and there were fears for his health.

But it didn't slow him down.

"I've had my share of scrapes over the years," he admits. "I've broken quite a number of bones in my legs and arms.

"I like thundering about. I'd rather be on a motorbike than in a car.

"I've always done these things. Why should I stop now?"

At the moment he's de. lighted by the renewed success of Dr Who on video. Young fans are rushing out to buy early episodes.

"Many of them are seeing me as Dr Who for the very first time," says Jon. They weren't even born when I was the Doctor!"

Jon followed William Hartnell and Patrick Troughton through the famous weather-beaten doors of the TARDIS in 1968.

For five years he was a dashing, debonair superhero, an antidote to the cartoon-strip characters imported from American TV.

Armed with little more than his wits and a walking stick he flitted through time to battle Daleks, Yetis and worse.

"I've never stopped being involved with Dr Who," he says. " attend conferences all over the world.

"In America, in particular, there's a huge following. God knows how many fans there are around the world - there must be millions.

"Science fiction has always had this effect on people. Look at Star Trek and the Trekkers.

"The series itself was a disaster – they took it off after just two seasons - but the repeats have run ever since.

"I've still got an affection for Dr Who, although I think doing a long run as the Doctor was perhaps a mistake. "Young directors now look at me as a cult actor and raise their hands in horror at the thought of working with me!"

Amazingly, unthinkably, Jon Pertwee should never have been Dr Who. He was originally lined up for a very different part.

"If fate had not shown its hand I might well have become the pride of the Home Guard rather than a time traveller," he reveals.

"I was originally earmarked to play Captain Mainwaring in Dad's Army. It should have been me rather than dear old Arthur Lowe who played that role.

This is the first time I have ever said this because it would have been very pompous of me when Arthur was still alive.

"I was in America when they made the decision. I was in a smash musical called There's a Girl in My Soup.

"I hadn't known they definitely wanted to go ahead with Dad's Army and I was forced to decide whether to stay in America or go back to Britain. I stayed put."

Arthur Lowe went on to create one of British TV comedy's most memorable characters - and Jon found himself in the TARDIS instead.

Watch for reviews of the top new video titles next week!

Caption: JON in his Whomobile in Invasion of the Dinosaurs