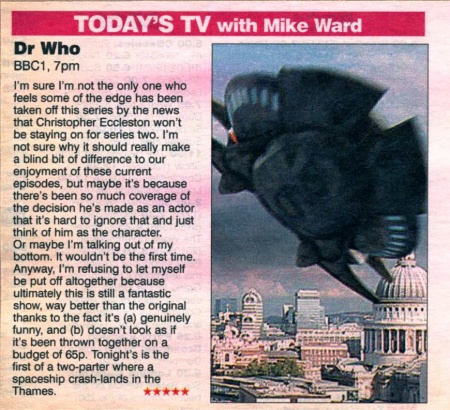 I'm sure I'm not the only one who feels some of the edge has been taken off this series by the news that Christopher Eccleston won't be staying on for series two. I'm not sure why it should really make a blind bit of difference to our enjoyment of these current episodes, but maybe it's because there's been so much coverage of the decision he's made as an actor that it's hard to ignore that and just think of him as the character. Or maybe I'm talking out of my bottom. It wouldn't be the first time. Anyway, I'm refusing to let myself be put off altogether because ultimately this is still a fantastic show, way better than the original thanks to the fact it's (a) genuinely funny, and (b) doesn't look as if it's been thrown together on a budget of 65p. Tonight's is the first of a two-parter where a spaceship crash-lands in the Thames.