Top of the docs 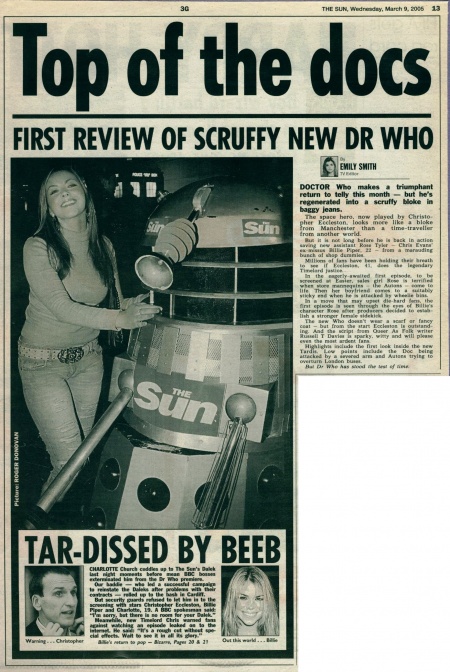 DOCTOR Who makes a triumphant return to telly this month — but he's regenerated into a scruffy bloke in baggy jeans.

The space hero, now played by Christopher Eccleston, looks more like a bloke from Manchester than a time-traveller from another world.

But it is not long before he is back in action saving new assistant Rose Tyler -- Chris Evans' ex missus Billie Piper, 22 — from a marauding bunch of shop dummies.

Millions of fans have been holding their breath to see if Eccleston, 41, does the legendary Timelord justice.

In the eagerly-awaited first episode, to be screened at Easter, sales girl Rose is terrified when store mannequins — the Autons — come to life. Then her boyfriend comes to a suitably sticky end when he is attacked by wheelie bins.

In a move that may upset die-hard fans, the first episode is seen through the eyes of Billie's character Rose after producers decided to establish a stronger female sidekick.

The new Who doesn't wear a scarf or fancy coat — but from the start Eccleston is outstanding. And the script from Queer As Folk writer Russell T Davies is sparky, witty and will please even the most ardent fans.

Highlights include the first look inside the new Tardis. Low points include the Doc being attacked by a severed arm and Autons trying to overturn London buses.

But Dr Who has stood the test of time.

CHARLOTTE Church cuddles up to The Sun's Dalek last night moments before mean BBC bosses exterminated him from the Dr Who premiere.

Our baddie — who led a successful campaign to reinstate the Daleks after problems with their contracts — rolled up to the bash in Cardiff.

But security guards refused to let him in to the screening with stars Christopher Eccleston, Billie Piper and Charlotte, 19. A BBC spokesman said: "I'm sorry, but there is no room for your Dalek."

Meanwhile, new Timelord Chris warned fans against watching an episode leaked on to the internet. He said: "It's a rough cut without special effects. Wait to see it in all its glory."

Caption: Out this world ... Billie