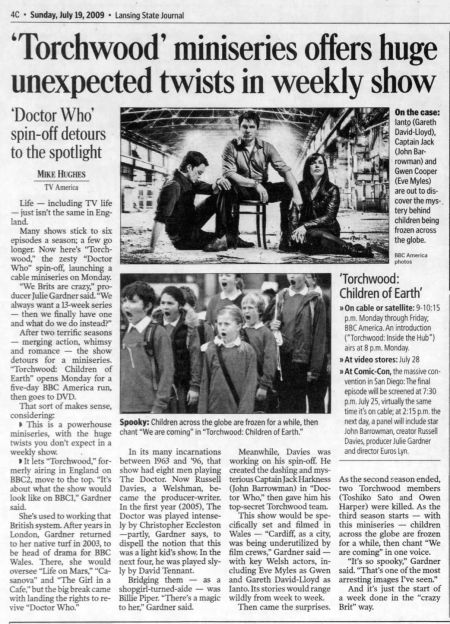 'Doctor Who' spin-off detours to the spotlight

Life — including TV life — just isn't the same in England.

Many shows stick to six episodes a season; a few go longer. Now here's "Torch-wood: the zesty "Doctor Who spin-off, launching a cable miniseries on Monday.

"We Brits are crazy," producer Julie Gardner said. "We always want a 13-week series — then we finally have one and what do we do instead?"

After two terrific seasons — merging action, whimsy and romance — the show detours for a miniseries. "Torchwood: Children of Earth" opens Monday for a five-day BBC America run, then goes to DVD.

That sort of makes sense, considering

She's used to working that British system. After years in London. Gardner returned to her native turf in 2003, to be head of drama for BBC Wales. There, she would oversee "Life on Mars: "Casanova" and The Girl in a Cafe: but the big break came with landing the rights to revive "Doctor Who."

In its many incarnations between 1963 and '96, that show had eight men playing The Doctor. Now Russell Davies, a Welshman, became the producer-writer. In the first year (2005), The Doctor was played intensely by Christopher Eccleston — partly, Gardner says, to dispell the notion that this was a light kid's show. In the next four, he was played slyly by David Tennant.

Bridging them — as a shopgirl-turned-aide — was Billie Piper. "There's a magic to her: Gardner said.

Meanwhile, Davies was working on his spin-off. He created the dashing and mysterious Captain Jack Harkness (John Barrowman) in "Doctor Who: then gave him his top-secret Torchwood team.

This show would be specifically set and filmed in Wales — "Cardiff, as a city, was being underutilized by film crews: Gardner said — with key Welsh actors, including Eve Myles as Gwen and Gareth David-Lloyd as Ianto. Its stories would range wildly from week to week.

Then came the surprises.

As the second season ended, two Torchwood members (Toshiko Sato and Owen Harper) were killed. As the third season starts — with this miniseries — children across the globe are frozen for a while, then chant "We are coming" in one voice.

"It's so spooky: Gardner said. "That's one of the most arresting images I've seen."

And it's just the start of a week done in the "crazy Brit" way.

Spooky: Children across the globe are frozen for a while, then chant "We are coming" in "Torchwood: Children of Earth."

On the case: Ianto (Gareth David-Lloyd), Captain Jack (John Barrowman) and Gwen Cooper (Eve Myles) are out to discover the mystery behind children being frozen across the globe.