Tributes pour in for Dr Who star 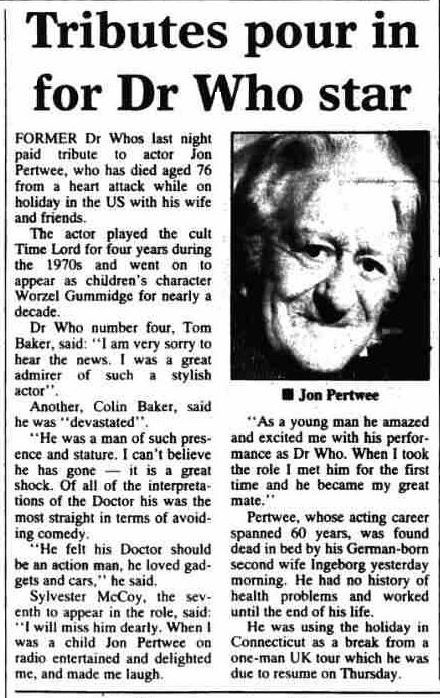 FORMER Dr Whos last night paid tribute to actor Jon Pertwee, who has died aged 76 from a heart attack while on holiday in the US with his wife and friends.

The actor played the cult Time Lord for four years during the 1970s and went on to appear as children's character Worzel Gummidge for nearly a decade.

Dr Who number four, Tom Baker, said: "I am very sorry to hear the news. I was a great admirer of such a stylish actor".

Another, Colin Baker, said he was "devastated".

"He was a man of such presence and stature. I can't believe he has gone — is a great shock. Of all of the interpretations of the Doctor his was the most straight in terms of avoiding comedy.

"He felt his Doctor should be an action man, he loved gadgets and cars," he said.

Sylvester McCoy, the seventh to appear in the role, said: "I will miss him dearly. When I was a child Jon Pertwee on radio entertained and delighted me, and made me laugh.

"As a young man he amazed and excited me with his performance as Dr Who. When I took the role I met him for the first time and he became my great mate."

Pertwee, whose acting career spanned 60 yews, was found dead in bed by his German-born second wife Ingeborg yesterday morning. He had no history of health problems and worked until the end of his life.

He was using the holiday in Connecticut as a break from a one-man UK tour which he was due to resume 0on Thursday.