Trying to keep one step ahead of the audience 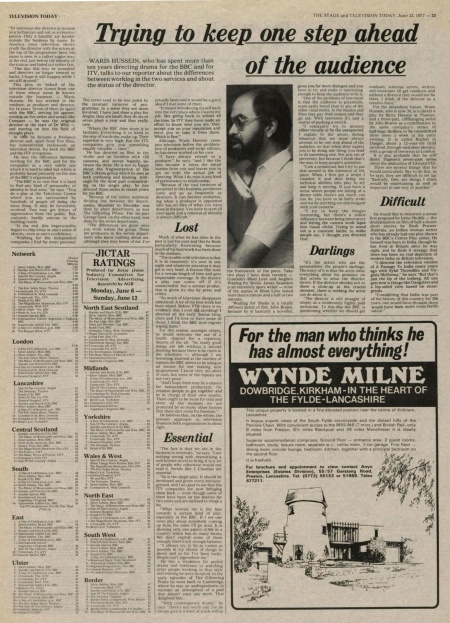 WARIS HUSSEIN, who has spent more than ten years directing drama for the BBC and for ITV, talks to our reporter about the differences between working in the two services and about the status of the director.

"IN television the director is treated, as a technician and not as a creative person. Only a handful are known outside the business by name. In America most elevision shows credit the director with the actors at the top of the programme: here, his name is seen in a rather vague way at the end, just before the identity of the station, and faded out rather fast.

"One day this may be remedied and directors no longer treated as hacks. I hope it will happen while I am still around." This plea on behalf of the television director comes from one of them whose name is known outside the business — Waris Hussein. He has worked in the medium, as producer and director, for 14 years. Seven of them he spent with the BBC, serving his apprenticeship on live series and serials like Compact — he was the original director at the start of Dr Who — and moving on into the field of straight plays.

In 1968 he became a freelance director and, apart from five films, has concentrated exclusively on television drama, for both the BBC and the ITV companies.

He sees the difference between working for the BBC and for the companies as a very subtle one which it is hard to label but which is probably based primarily on the size of the BBC's organisation.

"The BBC is so vast that it is hard to find any kind of personality or identity in that area." he says. "You do a play at the Television Centre where you are surrounded by hundreds of people all doing the same thing. It may be favourably received. You may get letters of appreciation from the public. But. curiously, hardly anyone in the building reacts,

"In the end, this impersonality begins to chip away at one's sense of identity; even at one's confidence.

"Working for the independent companies I find far more personal. The crews tend to be less jaded by the constant turnover of programmes. In a sense they are more involved. I have just done a play for Anglia; they are small, they do six or seven plays a year and they really care.

"Where the BBC does score is in facilities. Everything is to hand in the way of wardrobe, make-up. Their expertise is very high. But the ITV companies give you something equally valuable — time."

He has directed on film, in the studio and on location with OB cameras. and moves happily. between the three. He is not so happy about the fragmentation of the BBC's drama group which he sees as both confusing and limiting. Although for the most part concentrating on the single play. he has directed three series in recent years for the BBC.

"Because of the rather indefinite dividing line between the departments. Shoulder to Shoulder was done by plays department, as was The Glittering Prizes. The six-part George Sand, on the other hand, was done by the series department.

"The differences are great once you work within the group. There are producers in the serials department who know nothing about me, although they may know of me. I've actually been told it would be a good idea if I met some of them.

"It means introducing myself back into the very place where! learnt my job: like going back to school all the time. In ITV they have made an effort to know who you are, they accept you on your reputation and leave you to take it from there. Which is fine."

Although Waris Hussein came into television before the proliferation of producers and script editors. he has never worked on his own.

"I have always related to a producer." he says, "and I like the idea because it takes the initial burden from you and leaves you to get on with the actual job of directing. What ! do miss is any kind of permanency in relationship.

"Because of the vast turnover of personnel in this business, producers come and go as frequently as directors. It can become embarrasing when a producer is appointed who has no idea of what you have done in the past. You have to start all over again and a renewal of identity is always difficult."

Much of what he has done in the past is lost for ever and this he finds particularly frustrating because much of his best work has been done in the medium.

"The trouble with television is that it is so transitory: it's over in one night and whatever attention it may get is very brief. A feature film runs for a certain length of time and gets respectable coverage. In the theatre a play can come off if it's unsuccessful, but a serious production is given its due by press and critics.

"So much of television disappears unnoticed. A lot of my best work has been wiped. Before VTR there is no evidence that I ever did anything! I directed all the early Simon Gray plays and I'd love to have some of those; I think the BBC now regrets wiping them."

For this reason, amongst others. he would welcome the use of a fourth channel for a repertory theatre of the air. "So many good things are left without a second showing because there is no room in the schedules — although I am becoming alarmed at the number of repeats the BBC seems to be using as an excuse for not making new programmes. I know they are short of cash. but some of the repeats are not very good.

"And I hope there may be a chance for independent production; for creative people to get together and be in charge of their own results. There ought to be room for trial and error. At the moment we are protected by so many other factors that there isn't room for freedom."

He believes that, on the whole, the present approach to television drama in both organisations is about right.

"The fact is that we are in the business to entertain." he says. "I see nothing wrong with dramatising a well known novel to bring it to a lot of people who otherwise would not read it. Serials like I, Claudius are essential.

"So is the single play. It should be developed and given every encouragement, and 1 am glad to see that the ITV companies are now bringing them back — even though some of them have been on the shelves for two years and are inclined to creak a bit.

"What worries me is the bias towards a certain kind of play, especially at the BBC. If I see one more play about somebody coming up from the mine I'll go mad. It is showing only one aspect of life in a country which has so many facets. We don't exploit some of them enough; there's not enough balance.

"I always try to be as varied as possible in my choice of things to direct and so far I've been lucky. People can't pigeonhole me."

He has a weakness for period drama and confesses to watching other people working in that style and wishing he were involved. In the early episodes - of The Glittering Prizes he went back to Cambridge, where he was an undergraduate. to recreate an atmosphere of a past that doesn't exist any more. That delighted him.

"With contemporary drama," he says. "there's not much you can do except give it a kind of truth within the framework of the piece. Take two plays I have done recently — Granada's Blind Love and Anglia's Waiting for Sheila. James Saunders is an extremely spare writer — none of the scenes in Blind Love lasted more than a minute and a half or two minutes.

"Waiting for Sheila is a totally different kettle of fish. John Braine, because he is basically a novellist, gives you far more dialogue and you have to try and make it interesting enough to keep the audience with it.

"One of the problems of television is that the audience is potentially more easily bored than in any of the other visual media. In the theatre and films they pay their money and they go out. With television it's just a matter of pushing a switch.

"I constantly try to interest either visually or by the unexpected. I explain to the actors during rehearsal that we must always attempt to be one step ahead of the audience, so that when they expect you to be doing one thing, you tend to do something else. Not just out of perversity, but because I think that's the way to keep people's attention.

"I am a technician, but I try to put that second to the intention of the piece. When I first get a script I visualise it and then bring my technical abilities into play to try and keep it moving. If you have a scene where people are sitting at a dinner table there's not much you can do: you have to be fairly static and not do anything too extravagant with your cameras.

"I try to keep the images interesting, but there's a subtle difference between being innovatory and letting the camera work lapse into visual cliché. Trying to stand out is a constant battle; to make people say. 'I thought you directed that'.

"It's the actors who are the personalities, the people's darlings. The irony of it is that the actor owes everything about his presence on that screen to what the director shows. If the director decides not to show a close-up at the crucial moment, there is nothing the actor can do about it.

"The director is still thought of simply as a moderately highly paid technician. To this day the BBC is questioning whether we should get residuals; whcicas actors, writers and musicians all get residuals and without a director they would not be there. I think of the director as a creative force."

For the immediate future, Waris Hussein. who is now 38, is to direct a play for Barry Hanson at Thames; and a three-part. cliffhanging serial by John Bowen as a contribution to the same company's series of half-hour thrillers to be transmitted three times a week in the early evening. It is called Rachel in Danger. about a l2-year-old child involved, through mistaken identity, with a group of terrorists in London.

It is also probable that he will direct Thames's seven-part series about the abdication of Edward VIII. There are several things that he would particularly like to do but, as he says, they are difficult to set up. "Basically, they are things I think would be entertaining as well as important in one way or another"

He would like to resurrect a series first proposed by Irene Shubik — the dramatisation on film of half a dozen short stories by Ruth Prawer Jhabvala, an Indian woman writer who has already had one play shown in the BBC's Centre Play series. He himself was born in India, though he has lived in Britain since he was eight, and he finds it strange that there has been no real depiction of modern India on British television.

"I directed the television version of A Passage To India many years ago with Sybil Thorndike and Virginia McKenna." he says "But that's just the tip of the iceberg. All one gets now is things like Gangsters and a lop-sided view based on immigrants.

"Considering that India was part of the history of this country for 300 years, one would have thought there would have been more cross-fertilisation."