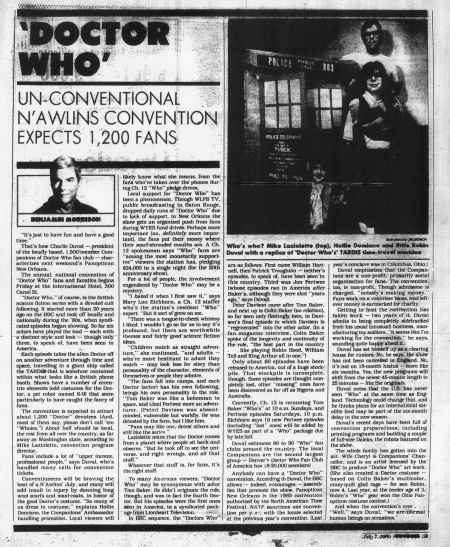 "It's just to have fun and have a good time."

The annual, national convention of "Doctor Who" fans and fanatics begins Friday at the International Hotel, 300 Canal St.

"Doctor Who," of course, is the British science fiction series with a devoted cult following. It started more than 20 years ago on the BBC and took off locally and nationally during the '80s, when syndicated episodes began showing. So far six actors have played the lead — each with a distinct style and look though only three, to speak of, have been seen in America.

Each episode takes the alien Doctor off on another adventure through time and space. travelling in a giant ship called the TARDIS that is somehow contained within what looks like a British phone booth. Shows have a number of eccentric elements (odd costumes for the Doctor: a pet robot named K-9) that seem particularly to have caught the fancy of fans.

The convention is expected to attract about 1,200 "Doctor" devotees. (And, most of them say, please don't call 'em "Whoies.") About half should be local, the rest from all over the country, as far away as Washington state, according to Mike Laziolette. convention program director.

Fans include a lot of "upper Income, professional people," says Duval, who's handled many calls for convention tickets.

Conventioneers will be braving the heat of a N'Awlins July, and many will add insult to injury by donning long wool scarfs and maxi-coats. In honor of the good Doctor's costume. "So many of us dress in costume." explains Hollle Domiano, the Companions' Ambassador handling promotion. Local viewers will likely know what she means, from the fans who've taken over the phones during Ch. 12 "Who" pledge drives.

Local support for "Doctor Who" has been a phenomenon. Though WLPB TV, public broadcasting in Baton Rouge, dropped daily runs of "Doctor Who" due to lack of support. In New Orleans the show gets an organized push from fans during WYES fund drives. Perhaps more important (no, definitely more Important) the fans put their money where their scarf-shrouded mouths are. A Ch. 12 spokesman says "Who" fans are "among the most monetarily supportive" viewers the station has, pledging $24,000 in a single night (for the 20th anniversary show).

For a lot of people, the involvement engendered by "Doctor Who" may be a mystery.

"I hated It when I first saw it." says Mary Lou Eichhorn, a Ch. 12 staffer who's the station's resident "Who" expert. "But it sort of grew on me.

"There was a tongue-in-cheek whimsy I liked. I wouldn't go so far as to say it's profound, but there are worthwhile themes and fairly good science fiction ideas.

"Children watch as straight adventure," she continued, "and adults — who're more hestitant to admit they watch — may look less for story than personality of the character, elements of themselves or people they admire. "The fans fall into camps and each Doctor (actor) has his own following, brings his own personality to the role. "Tom Baker was like a bohemian In space, and (Jon) Pertwee more an adventurer. (Peter) Davison was absentminded. vulnerable but worldly. He was detested by the fans, but I like him.

"Fans may like one. detest others and still like the series" Lazlolette notes that the Doctor comes from a planet where people sit back and observe. "But he took off to see the universe. and right wrongs. and all that stuff."

Whatever that sluff is, for fans. It's the right stuff.

To many American viewers. "Doctor Who" may be synonymous with actor Tom Baker. He didn't originate the role, though, and was In fact the fourth Doctor. But his episodes were the first ones seen in America, in a syndicated package from Lionheart Television.

In BBC sequence, the "Doctors Who are as follows: First came William Hartnell, then Patrick Troughton — neither's episodes, to speak of, have been seen in this country. Third was Jon Pertwee (whose episodes ran in America after Baker's, although they were shot "years ago," says Duval).

Peter Davison came after Tom Baker, and next up is Colin Baker (no relation). so far seen only fleetingly. here, In Davison's final episode in which Davison is "regenerated" into the other actor. (In a fan magazine interview. Colin Baker spoke of the longevity and continuity of the role, "the best part in the country like playing Robin Hood. William Tell and King Arthur all in one.")

Only about 80 episodes have been released to America, out of a huge stockpile. That stockpile Is incomplete, though. Some episodes are thought completely lost. other "missing" ones have been discovered as far off as Nigeria and Australia.

Currently, Ch. 12 is rerunning Tom Baker "Who's" at 10 a.m. Sundays, and Pertwee episodes Saturdays. 10 p.m. Elchhorn says 10 new Pertwee episodes (Including "lost" ones) will be added by WYES as part of a "Who" package due by late fall.

Duval estimates 80 to 90 "Who" fan clubs around the country. The local Companions are the second largest group _ Denver's Doctor Who Fan Club of America has 18-20,000 members!

Anybody can have a "Doctor Who" convention. According to Duval, the BBC allows — indeed, encourages — assemblies that promote the show. Panopticon New Orleans is the 1985 convention authorized by are North American Time Festival. NATF sanctions one convention per year with the locale selected at the previous year's convention. (Last year's conclave was in Columbus, Ohio.)

Duval emphasizes that the Companions are a non-profit, primarily social organization for fans. The convention, too, Is non-profit. Though admission is charged, "nobody's making money." Fans work on a volunteer basis, and leftover money is earmarked for charity.

Getting to host the convention has taken work — two years of It. Duval admits to being completely sidetracked from his usual (unusual) business. manufacturing toy soldiers. "It seems like I'm working for the convention." he says. sounding quite happy about it.

Duval has set himself up as a clearing house for rumors. No, he says, the show has not been cancelled In EnO nd. No. It's not on 18-month hiatus — more like six months. Yes, the new programs will shift from the newer 45-minute length to 25 minutes — like the originals.

Duval notes that the U.S, has never seen "Who" at the same time as England. Technology could change that, and he thinks plans for an International satellite feed may be part of the six-month delay in the new season. Duval's recent days have been full of convention preparations, including printing programs and building a couple of full-size Daleks, the robots featured on the show.

The whole family has gotten into the act. Wife Cheryl is Companions' Chancellor, and is an artist licensed by the BBC to produce "Doctor Who" art work. (She also created a Doctor costume — based on Colin Baker's multicolor, crazy quilt glad rags — for son Robin, now 4. Last year. at the tender age of 3, Robin's "Who" gear won the Ohio Panopticon costume contest.)

And when the convention's over...

Caption: Who's who? Mike Laziolette (top), Hollie Domiano and little Robin Duval with a replica of 'Doctor Who's TARDIS time-travel machine.