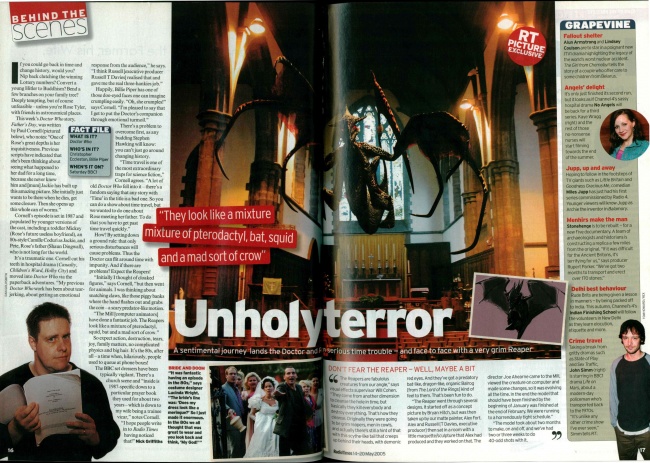 If you could go back in time and change history, would you? Nip back clutching the winning Lottery numbers? Convert a young Hitler to Buddhism? Bend a few branches on your family tree? Deeply tempting, but of course unfeasible—unless you're Rose Tyler, with friends in astronomical places.

This week's Doctor Who story, Father's Day, was written by Paul Cornell (pictured below), who notes: "One of Rose's great depths is her inquisitiveness. Previous scripts have indicated that she's been thinking about seeing what happened to her dad for a long time, because she never knew him and [mum] Jackie has built up this amazing picture. She initially just wants to be there when he dies, get some closure. Then she opens up this whole can of worms."

Cornell's episode is set in 1987 and populated by younger versions of the cast, including a toddler Mickey (Rose's future useless boyfriend), an 80s-style Camille Coduri as Jackie, and Pete, Rose's father (Shaun Dingwall), who is not long for the world.

It's a traumatic one. Cornell cut his teeth in hospital drama (Casualty, Children's Ward, Holby City) and moved into Doctor Who via the paperback adventures. "My previous Doctor Who work has been about tear-jerking, about getting an emotional response from the audience," he says. "I think Russell [executive producer Russell T Davies] realised that and gave me the real three-hankies job."

Happily, Billie Piper has one of those doe-eyed faces one can imagine crumpling easily. "Oh, she crumples!" says Cornell. "I'm pleased to say that I get to put the Doctor's companion through emotional turmoil."

There's a problem to overcome first, as any budding Stephen Hawking will know: you can't just go around changing history.

"Time travel is one of the most extraordinary traps for science fiction," Cornell agrees. "A lot of old Doctor Who fell into it — there's a fandom saying that any story with 'Time' in the title is a bad one. So you can do a show about time travel, but we wanted to do one about Rose meeting her father. To do that you have to get past time travel quickly."

How? By setting down a ground rule: that only serious disturbances will cause problems. Thus the Doctor can flit around time with impunity. And if there are problems? Expect the Reapers!

"Initially I thought of cloaked figures," says Cornell, "but then went for animals. I was thinking about snatching claws, like those piggy banks where the hand flashes out and grabs the coin — a scary predator-like motion.

"The Mill [computer animators] have done a fantastic job. The Reapers look like a mixture of pterodactyl, squid, bat and a mad sort of crow."

So expect action, destruction, tears, joy, family matters, no complicated physics and big hair. It's the 80s, after all — a time when, hilariously, people used to queue at phone boxes!

The BBC set dressers have been typically vigilant. There's a church scene and "inside is 1987-specific down to a particular prayer book they used for about two years — which is down to my wife being a trainee vicar," notes Cornell. "I hope people write in to Radio Times having noticed that!"

The Reapers are fabulolus creatures from our angle;' says visual effects supervisor Will Cohen. "They come from another dimension to cleanse the hole in time, but basically they kill everybody and destroy everything. That's how they cleanse. Originally they were going to be grim reapers, men in cowls, and actually there's still a hint of that with this scythe-like tail that creeps up behind their heads, with demonic red eyes. And they've got a predatory bat-like, dragon-like, organic Balrog [from The Lord of the Rings] kind of feel to them. That's been fun to do.

"The Reaper went through several designs. It started off as a concept picture by Bryan Hitch, but was then taken up by our matte painter, Alex Fort. Alex and Russell [T Davies, executive producer] then sat in a room with a little maquette/sculpture that Alex had produced and they worked on that. The director Joe Ahearne came to the Mill, viewed the creature on computer and made some changes, so it was evolving all the time. In the end the model that should have been finished by the beginning of January was finished at the end of February. We were running to a horrendously tight schedule."

"The model took about two months to make, on and off, and we've had two or three weeks to do 40-odd shots with it.

BRIDE AND DOOM "It was fantastic having an episode in the 80s," says costume designer Lucinda Wright. "The bride's line was: 'Does my dress look like a meringue?' So I just made it enormous. In the 80s we all thought that was great to wear and you look back and think, 'My God!"'