Voice Behind the Daleks 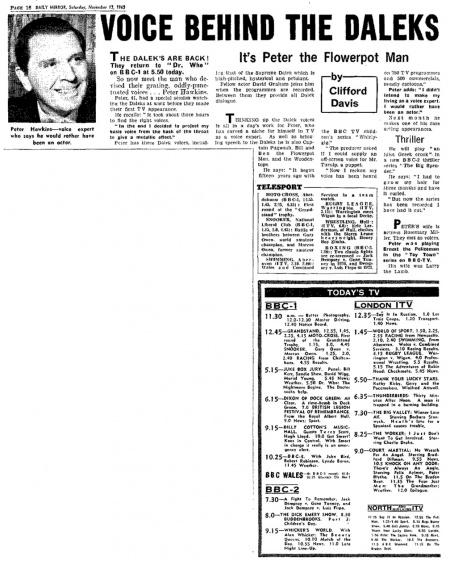 It's Peter the Flowerpot Man

So now meet the man who devised their grating, oddly-punctuated voices ... Peter Hawkins.

Peter, 41, had a special session watch. lag the Daleks at work before they made their first TV appearance.

He recalls: "It took about three hours to find the right voices.

"In the end I decided to project my basic voice from the back of the throat to give a metallic effect."

Peter has three Dalek voices, including, that of the Supreme Dalek which is high-pitched, hysterical and petulant.

Fellow actor David Graham joins him when the programmes are recorded. Between them they provide ail Dalek dialogue.

THINKING up the Dalek voices is all in a day's work for Peter, who has carved a niche for himself in T V as a voice expert. As well as bringing speech to the Daleks lie is also Captain Pugwash, Bill and Ben the Flowerpot Men, and the Woodentops.

He says: "It began fifteen years ago with the BBC TV children's series Whirly-gig."

"The producer asked if I could supply an off-screen voice for Mr. Turnip, a puppet.

"Now I reckon my voice has been heard on 750 T V programmes and 500 commercials. In mostly cartoons."

Peter adds: "I didn't intend to make my living as a voice expert. I would rather have been an actor."

Next month he makes one of his rare acting appearances.

He will play "an idiot Greek crook"- in a new BBC-2 thriller series "The Big Spender."

He says: "I had to grow my hair for three months and have it curled.

"But now the series has been recorded I have had it cut."

PETER'S wife is actress Rosemary Miller. They met as voices.

Peter was playing Ernest the Policeman in the "Toy Town" series on B B C-T V.

His wife was Larry the Lamb.

Caption: Peter Hawkins-voice expert who says he would rather have been an actor.