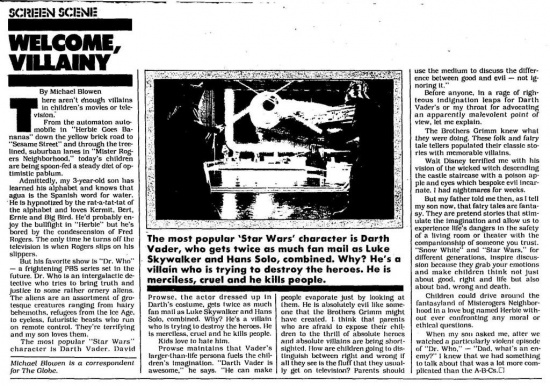 There aren't enough villains in children's movies or television.

From the automaton automobile in "Herbie Goes Bananas" down the yellow brick road to "Sesame Street" and through the tree-lined, suburban lanes in "Mister Rogers Neighborhood," today's children are being spoon-fed a steady diet of optimistic pablum.

Admittedly, my 3-year-old son has learned his alphabet and knows that agua is the Spanish word for water. He is hypnotized by the rat-a-tat-tat of the alphabet and loves Kermit, Bert, Ernie and Big Bird. He'd probably enjoy the bullfight in "Herbie" but he's bored by the condescension of Fred Rogers. The only time he turns off the television is when Rogers slips on his slippers.

But his favorite show is "Dr. Who" — a frightening PBS series set in the future. Dr. Who is an intergalactic detective who tries to bring truth and justice to some rather ornery aliens. The aliens are an assortment of grotesque creatures ranging from hairy behemoths, refugees from the Ice Age, to eyeless, futuristic beasts who run on remote control. They're terrifying and my son loves them.

The most popular "Star Wars" character is Darth Vader. David Prowse, the actor dressed up in Darth's costume, gets twice as much fan mail as Luke Skywalker and Hans Solo, combined. Wily? He's a villain who is trying to destroy the heroes. Ile is merciless, cruel and he kills people.

Kids love to hate him.

Prowse maintains that Vader's larger-than-life persona fuels the children's imagination. "Darth Vader Is awesome," he says. "He can make people evaporate just by looking at them. He is absolutely evil like someone that the Brothers Grimm might have created. 1. think that parents who are afraid to expose their children to the thrill of absolute heroes and absolute villains are being shortsighted. I low are children going to distinguish between right and wrong if all they see is the fluff that they usually get on television? Parents should use the medium to discuss the difference between good and evil — not ignoring it."

Before anyone, In a rage of righteous indignation leaps for Darth Vader's or my throat for advocating an apparently malevolent point of view, let me explain.

The Brothers Grimm knew what they were doing. These folk and fairy tale tellers populated their classic stories with memorable villains.

Walt Disney terrified me with his vision of the wicked witch descending the castle staircase with a poison apple and eyes which bespoke evil incarnate. I had nightmares for weeks.

But my father told me then, as I tell my son now, that fairy tales are fantasy. They are pretend stories that stimulate the imagination and allow us to experience life's dangers in the safety of a living room or theater with the companionship of someone you trust. "Snow White" and "Star Wars." for different generations, inspire discussion because they grab your emotions and make children think not just about good, right and life but also about bad, wrong and death.

Children could drive around the fantasyland of Mister Rogers Neighborhood In a love bug named Herbie without ever confronting any moral or ethical questions.

When my son asked me, after we watched a particularly violent episode of "Dr. Who," — "Dad, what's an enemy?" I knew that we had something to talk about that was a lot more complicated than the A-B-Cs.

Caption: The most popular 'Star Wars' character is Darth Vader, who gets twice as much fan mail as Luke Skywalker and Hans Solo, combined. Why? He's a villain who is trying to destroy the heroes. He is merciless, cruel and he kills people.