What Is This Thing Called Who?

From The Doctor Who Cuttings Archive
Revision as of 22:51, 20 May 2019 by John Lavalie (talk | contribs)
(diff) ← Older revision | Latest revision (diff) | Newer revision → (diff)
Jump to navigationJump to search 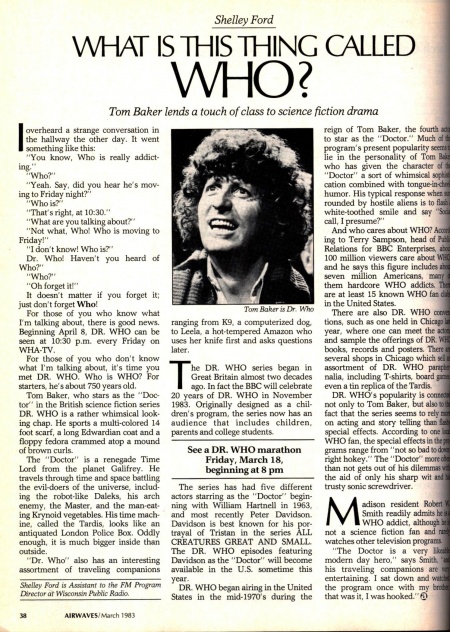 I overheard a strange conversation in the hallway the other day. It went something like this:

"You know, Who is really addicting."

"Yeah. Say, did you hear he's moving to Friday night?"

"What are you talking about?"

"Not what, Who! Who is moving to Friday!"

It doesn't matter if you forget it; just don't forget Who!

For those of you who know what I'm talking about, there is good news. Beginning April 8, DR. WHO can be seen at 10:30 p.m. every Friday on WHA-TV.

For those of you who don't know what I'm talking about, it's time you met DR. WHO. Who is WHO? For starters, he's about 750 years old.

Tom Baker, who stars as the "Doctor" in the British science fiction series DR. WHO is a rather whimsical looking chap. He sports a multi-colored 14 foot scarf, a long Edwardian coat and a floppy fedora crammed atop a mound of brown curls.

The "Doctor" is a renegade Time Lord from the planet Galifrey. He travels through time and space battling the evil-doers of the universe, including the robot-like Daleks, his arch enemy, the Master, and the man-eating Krynoid vegetables. His time machine, called the Tardis, looks like an antiquated London Police Box. Oddly enough, it is much bigger inside than outside.

"Dr. Who" also has an interesting assortment of traveling companions ranging from K9, a computerized dog, to Leela, a hot-tempered Amazon who uses her knife first and asks questions later.

The DR. WHO series began in Great Britain almost two decades ago. In fact the BBC will celebrate 20 years of DR. WHO in November 1983. Originally designed as a children's program, the series now has an audience that includes children, parents and college students.

The series has had five different actors starring as the "Doctor" beginning with William Hartnell in 1963, and most recently Peter Davidson. Davidson is best known for his portrayal of Tristan in the series ALL CREATURES GREAT AND SMALL. The DR. WHO episodes featuring Davidson as the "Doctor" will become available in the U.S. sometime this year.

DR. WHO began airing in the United States in the mid-1970's during the reign of Tom Baker, the fourth actor to star as the "Doctor." Much of the program's present popularity seems to lie in the personality of Tom Baker who has given the character of the "Doctor" a sort of whimsical sophistication combined with tongue-in-cheek humor. His typical response when surrounded by hostile aliens is to flash white-toothed smile and say "Social call, I presume?"

And who cares about WHO? According to Terry Sampson, head of Public Relations for BBC Enterprises, about 100 million viewers care about WHO and he says this figure includes about seven million Americans, many of them hardcore WHO addicts. Them are at least 15 known WHO fan clubs in the United States.

There are also DR. WHO conventions, such as one held in Chicago last year, where one can meet the actors and sample the offerings of DR. WHO books, records and posters. There an several shops in Chicago which sell as assortment of DR. WHO paraphernalia, including T-shirts, board games even a tin replica of the Tardis.

DR. WHO's popularity is connected not only to Tom Baker, but also to the fact that the series seems to rely more on acting and story telling than flashy special effects. According to one local WHO fan, the special effects in the programs range from "not so bad to down right hokey." The "Doctor" more often than not gets out of his dilemmas with the aid of only his sharp wit and his trusty sonic screwdriver.

Madison resident Robert W. Smith readily admits he is WHO addict, although he not a science fiction fan and rarely watches other television programs.

"The Doctor is a very like a modern day hero," says Smith, "and his traveling companions are very entertaining. I sat down and watch the program once with my brother, that was it, I was hooked."

See a DR. WHO marathon Friday, March 18, beginning at 8 pm

Shelley Ford is Assistant to the FM Program Director at Wisconsin Public Radio.

Caption: Tom Baker is Dr. Who