What a carry-on for two-gun Joan 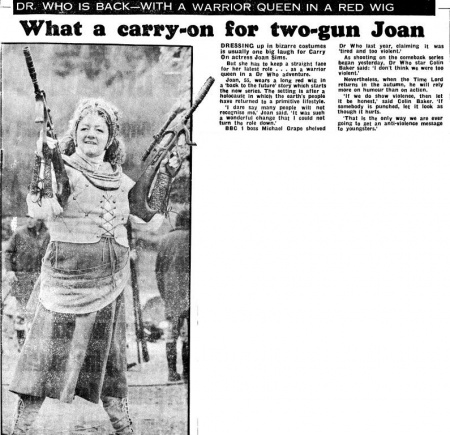 Dr. Who is back--with a warrior queen in a red wig

DRESSING up in bizarre costumes is usually one big laugh for Carry On actress Joan Sims.

But she has to keep a straight face for her latest role . . . as a warrior queen in a Dr Who adventure.

Joan, 55, wears a long red wig in a 'back to the future' story which starts the new series. The setting is after a holocaust in which the earth's people have returned to a primitive lifestyle.

'I dare say many people will not recognise me,' Joan said. 'It was such a wonderful change that I could not turn the role down.'

BBC 1 boss Michael Grade shelved Dr Who last year, claiming it was 'tired and too violent.'

As shooting on the comeback series began yesterday, Dr Who star Colin Baker said: 'I don't think we were too violent.'

Nevertheless, when the Time Lord returns in the autumn, he will rely more on humour than on action.

'If we do show violence, then let it be honest,' said Colin Baker. 'If somebody is punched, let it look as though it hurts.

'That is the only way we are ever going to get an anti-violence message to youngsters.'