Wheel in the Daleks, Doctor - whatever it takes to exterminate the BBC's bias 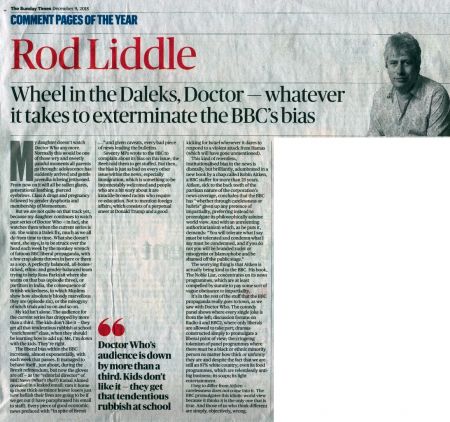 My daughter doesn't watch Doctor Who any more. Normally this would be one of those wry and sweetly painful moments all parents go through: adolescence has suddenly arrived and gentle juvenilia is being jettisoned. From now on it will all be sullen glares, generational loathing, pierced eyebrows. Class A drugs and pregnancy followed by gender dysphoria and membership of Momentum.

But we are not quite on that track yet, because my daughter continues to watch past series of Doctor Who — in fact, she watches them when the current series is on. She wants a Dalek fix, much as we all do from time to time. What she doesn't want, she says, is to be struck over the head each week by the monkey wrench of fatuous BBC liberal propaganda, with a few crap aliens thrown in here or there as a sop. A perfectly balanced, all-boxes-ticked, ethnic and gender-balanced team trying to help Rosa Parks sit where she wants on that bus (episode three), or partition in India, the consequence of British wickedness, in which Muslims show how absolutely bloody marvellous they are (episode six), or the misogyny of witch trials and so on and so on.

My kid isn't alone. The audience for the current series has dropped by more than a third. The kids don't like it — they get all that tendentious rubbish at school "enrichment" class, when they should be learning how to add up. Me, I'm down with the kids. They're right.

The liberal bias within the BBC increases, almost exponentially, with each week that passes. It managed to behave itself, just about, dining the Brexit referendum, but now the gloves are off — as the "editorial director" of BBC News (what's that?) Kamal Ahmed revealed in a leaked email: ram it home to those thick-as-mince leaver losers just how hellish their lives are going to be if we get out (I have paraphrased his email to staff). Every piece of good economic news prefaced with "In spite of Brexit ..." and given caveats, every bad piece of news leading the bulletins.

Seventy MPs wrote to the BBC to complain about its bias on this issue; the Beeb told them to get stuffed. But then, the bias is just as bad on every other issue within the news, especially immigration, which is something to be incontestably welcomed and people who are a bit wary about it are knuckle-browed racists who require re-education. Not to mention foreign affairs, which consists of a perpetual sneer at Donald Trump and a good kicking for Israel whenever it dares to respond to a violent attack from Hamas (which will have gone unmentioned).

This kind of relentless, institutionalised bias in the news is dismally, but brilliantly, adumbrated in a new book by a chap called Robin Aitken, a BBC staffer for more than 25 years. Aitken, sick to the back teeth of the partisan nature of the corporation's news coverage, concludes that the BBC has "whether through carelessness or hubris" given up any pretence of impartiality, preferring instead to promulgate its philosophically asinine world view. And with an unrelenting authoritarianism which, as he puts it, demands: "You will tolerate what I say must be tolerated and condemn what I say must be condemned, and if you do not you will be branded racist or misogynist or Islamophobe and be shamed off the public stage."

The worrying thing is that Aitken is actually being kind to the BBC. His book, The Noble Liar, concentrates on its news programmes, which are at least compelled by statute to pay some sort of vague obeisance to impartiality.

It's in the rest of the stuff that the BBC propaganda really goes to town, as we saw with Doctor Who. The comedy panel shows where every single joke is from the left; discussion forums on Radio 4 and BBC2, where only liberals are allowed to take part; dramas constructed simply to promulgate a liberal point of view; the cringeing tokenism of panel programmes where there must be a black or ethnic minority person no matter how thick or unfunny they are and despite the fact that we are still an 87% white country; even its food programmes, which are relentlessly anti-big business; its soaps; its light entertainment.

I beg to differ from Aitken —carelessness does not come into it. The BBC promulgates this idiotic world view because it thinks it is the only one that is true. And those of us who think different are simply, objectively, wrong.