When growing old is just what Dr Who ordered 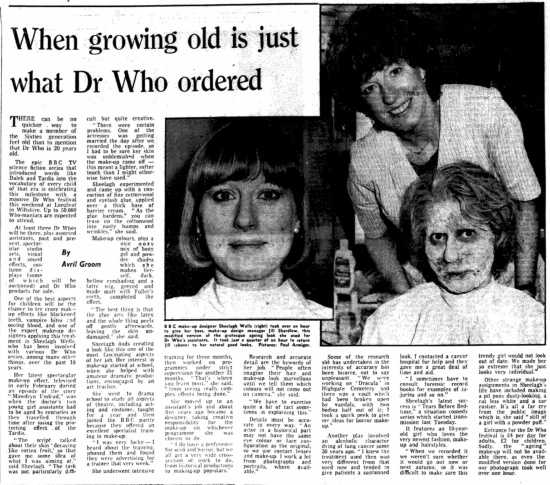 There can be no quicker way to make a member of the sixties generation feel old than to mention that Dr Who is 20 years old.

The epic BBC TV science fiction series that introduced words like Dalek and TARDIS into the vocabulary of every child of that era is celebrating this milestone with a massive Dr Who festival this weekend at Longleat in Wiltshire. Up to 50,000 Who-maniacs are expected to attend.

At least three Dr Who's will be there, plus assorted assistants, past and present, spectacular studio sets, visual and sound effects, costume displays (some of which will be auctioned) and Dr Who products for sale.

One of the best aspects for children will be the chance to try crazy makeup effects like blackened teeth, vampire bites and oozing blood, and one of the expert make-up designers applying this treatment is Sheelagh Wells, who has been involved with various Dr Who series, among many other things, over the past 10 years.

Her latest spectacular make-up effect, televised in early February during an episode of the story "Mawdryn Undead", was when the doctor's two young girl assistants had to be aged by centuries as they travelled through time after losing the protecting a fact of the Tardis.

"The script talked about their skin 'decaying like rotten fruit,' so that gave me some idea of what I was aiming at," said Sheelagh. "The task was not particularly difficult but quite creative.

"There were certain problems. One of the actresses was getting married the day after we recorded the episode, so I had to be sure her skin was unblemished when the make-up came off - this meant a lighter, softer touch than I might otherwise have used."

Sheelagh experimented and came up with a concoction of fighting cotton-wool and eyelash glue, applied over a thick base of barrier cream. "As the glue hardens, you can tease up the cottonwool into nasty bumps and wrinkles," she said.

Make-up colours, plus a nice oozy mix of body gel and powder shades which she makes herself, dark, hollow eyes shading and a tatty wig, greed and made matt with Fuller's earth, completed the effect.

"The best thing is that the glue acts like latex and the whole thing peels off gently afterwards, leaving the skin undamaged," she said.

Sheelagh finds creating a look like this one of the most fascinating aspects of her job. Her interest in make-up started at school, when she helped with amateur dramatic productions, encouraged by her our teacher.

She went to drama school to study all aspects of theatre, including acting and costume, taught for a year and then joined the BBC partly because they offered an excellent specialist training in make-up.

"I was very lucky - I heard about the training, phoned them and found they were advertising for a trainee that very week."

She underwent intensive training for three months, then worked on programmes under strict supervision for another 21 months. "That's where you learn most," she said, "from seeing really complex effects being done."

She moved up to an assistant's job and about five years ago became a designer taking creative responsibility for the make up on whichever programme she was chosen to do.

"I have a preference for sci-fi and horror, but we all get a very wide cross section of work to do, from historical productions to making a pop-stars."

Research and accurate detail are the bywords of her job. "People often imagine their hair and make-up look marvellous until we tell them which colours will not come out on camera," she said.

"We have to exercise quite a bit of tact sometimes in explaining this."

Details must be accurate in every way. "An actor in a historical part may not have the same eye colour or face configuration as the original, so we use contact lenses and make-up. I work a lot from photographs and portraits, where available."

Some of the research she has undertaken in the interests of accuracy has been bizarre, not to say unpleasant. "We were working on 'Dracula' in Highgate Cemetery and there was a vault which had been broken open by vandals, with two bodies half out of it; I took a quick peek to give me ideas for horror makeup."

Another play involved an alcoholic character dying of lung cancer some 30 years ago. "I knew the treatment used then was very different from that used now and tended to give patients a suntanned look. I contacted a cancer hospital for help and they gave me a great deal of time and aid.

"I sometimes have to consult forensic record books for examples of injuries and so on."

It features an 18-year-old girl who loves the very newest fashion, makeup and hairstyles.

"When we recorded it we weren't sure whether it would go out now or next autumn, so it was difficult to make sure this trendy girl would not look out of date. We made her so extreme that she just looks very individual."

Other strange make-up assignments in Sheelagh's life have included making a pit pony dusty looking, a rat less white and a car rustier. It's all a far cry from the public image which is, she said "still of a girl with a powderpuff."

Entrance for the Dr who festival is £4 per day for adults, £2 for children. Sadly the aging make-up will not be available there, as even the modified version done for our photograph took well over one hour.

Caption: BBC make-up designer Sheelagh Wells (right) took over an hour to give her boss, make-up designer Jill Sherrard, this modified version of the grotesque ageing look she used for the Dr Who's assistant. It took just quarter of an hour to return Jill (above) to her natural good looks.