Who's Who? (Capital Gay) 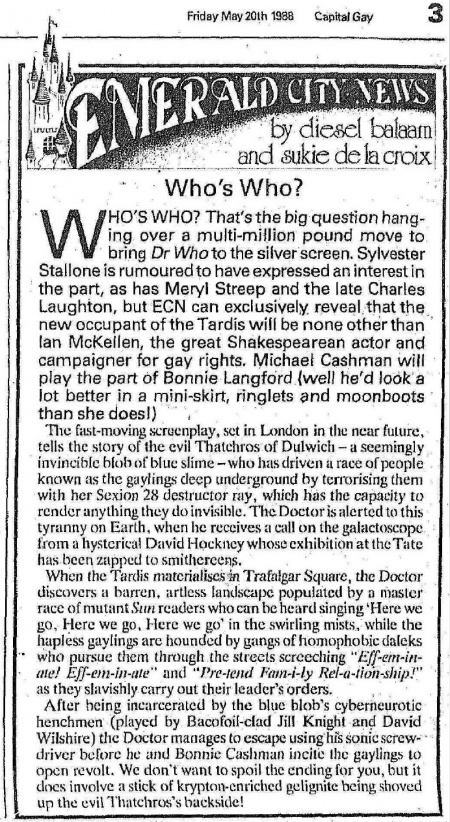 WHO'S WHO? That's the big-question hanging over a multi-million pound move to bring Dr Who to the silver screen. Sylvester Stallone is rumoured to have expressed an interest in the part, as has Meryl Streep and the late Charles Laughton, but ECN can exclusively, reveal that the new occupant of the Tardis will be none other than an McKellen, the great Shakespearean actor and campaigner for gay rights. Michael Cashman will play the part Of Bonnie Langford (well he'd look a lot better in a mini-skirt, ringlets and moonboots than she does!)

The fast-moving screenplay, set in London in the near future, tells the story of the evil Thatchros of Dulwich — a seemingly invincible blob of blue slime —Who has driven a race of people known as the gaylings deep underground by-terrorising them with her Sexion 28 destructor ray, which has the capacity to render anything they do invisible. The. Doctor is alerted to this tyranny on Earth, when he receives a call on the galactoscope from a hysterical David Hackney whose exhibition at the Tate has been zapped to smithereens.

When the Tardis materialises on Trafalgar Square, the Doctor discovers a barren, artless landscape populated by a Master race of mutant Sun readers who can be heard singing 'Here we go. Here we go. Here we go' in the swirling mists, while the hapless gaylings are hounded by gangs of homophobic daleks who pursue them through the streets screeching "Eff-em-in-ate! Eff-em-in-ate" and "Pre-tend Faim-i-ly Rel-a-tion-ship!" as they slavishly carry out their leader's orders.

After being incarcerated by the blue blob's cyberneurotic henchmen (played by Bacofoil-clad Jill Knight and David Wilshire) the Doctor manages to escape using his sonic screwdriver before he and Bonnie Cashman incite the gaylings to open revolt. We don't want to spoil the ending for you, but it does involve a stick of krypton-enriched gelignite being shoved up the evil Thatchros's backside!