Who's Who (Daily Express) 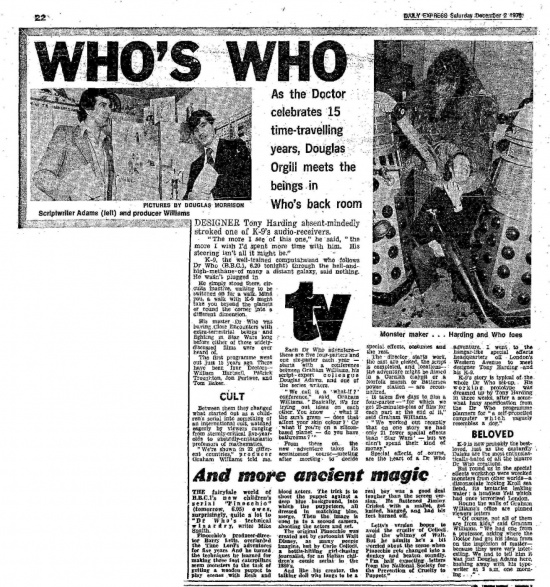 As the Doctor celebrates 15 time-travelling years, Douglas Orgill meets the beings in Who's back room

"The more I see of this one," he said, " the more I wish I'd spent more time with him. His steering isn't all it might be."

K-9, the well-trained computahound who follows Dr Who (B.B.C.1, 6.20 tonight) through the hell-and-high-methane of many a distant galaxy, said nothing. He wasn't plugged in.

He simply stood there, circuits inactive, waiting to be switched on for a walk. Mind you, a walk with K-9 might take you beyond the planets or round the corner into a different dimension.

His master Dr Who was having Close Encounters with extra-terrestrial beings and fighting in Star Wars long before either of those widely-discussed films were ever heard of.

The first programme went out just 15 years ago. There have been four Doctors—William Hartnell, Patrick Troughton, Jon Pertwee, and Tom Baker.

Between them they changed what started out as a children's serial into something of an international cult, watched eagerly by viewers ranging from sternly-critical five-year-olds to absurdly-enthusiastic professors of mathematics.

Each Dr Who adventure-there are five four-parters and one six-parter each year — starts with a conference between Graham Williams, his script-expert colleague Douglas Adams, and one of the series writers.

"We call it a 'what-if?' conference," said Graham Williams." Basically, it's for trying out ideas on each other. You know what if the sun's green — does that affect your skin colour? Or what if you're on a silicon-based planet — do you have bathrooms?

From there on, the new adventure takes its accustomed course—meeting after meeting to decide special effects, costumes and the rest.

The director starts work, the cast are picked, the script is completed, and locations—the adventure might be filmed in a Cornish claypit or a Norfolk marsh or Battersea power station — are reconnoitred.

It takes five days to film a four-parter —"for which we get 25-minutes-plus of film for each part at the end of it," said Graham Williams.

"We worked out recently that on one story we had only 21 fewer special effects than 'Star Wars' — but we didn't spend their kind of money."

Special effects, of course, are the heart of a Dr Who adventure. I went to the hangar-like special effects headquarters off London's Western Avenue to meet designer Tony Harding—and his K-9.

K-9's story is typical of the whole Dr Who set-up. His working prototype was dreamed up by Tony Harding in three weeks, after a somewhat hazy specification from the Dr Who programme planners for "a self-propelled computer which vaguely resembles a dog."

K-9 is now probably the best-loved, just as the dastardly Daleks are the-most enthusiastically-hated of all the bizarre Dr Who creations.

But round us in the special effects workshop were wrecked monsters from other worlds—a disconsolate looking Kroll sea fiend, its tentacles leaking water : a headless Yeti which had once terrorised London.

Round the walls of Graham Williams's office are pinned viewers letters.

"Of course, not all of them are from kids," said Graham Williams. "We had one from a professor, asking where the Doctor had got his ideas from on the implosion of matter—because they were very interesting. We had to tell him it was just Douglas Adams here, bashing away with his typewriter at 2 a.m. one morning ..."

Pinocchio's producer-director Barry Letts, overlorded the Time Lord's adventures for five years. And be turned the techniques he learned for making three foot caterpillars seem monsters to the task of getting a wooden puppet to play scenes with flesh and blood actors. The trick Is to shoot the puppet against a deep blue background, into which the puppeteers, all dressed in matching blue, merge. Then the hinge is cued in to a second camera, shooting the actors and set.

The original Pinocchio was created not by cartoonist Walt Disney, as many people Imagine, but by Carlo Collodi, a bottle-hitting girl-chasing journalist, for an Italian children's comic serial in the 1880's.

And like his creator, the talking doll who longs to be real boy was a good deal tougher than the screen version. He flattened Jiminy Cricket with a mallet, got knifed, hanged, and bad his feet burned off.

Letts's version hopes to avoid the cruelty of Collodi and the whimsy of Walt. But he admits he's a bit worried about the scene when Pinocchio gets changed into a donkey and beaten soundly. " I'm half expecting letters from the National Society for the Prevention of Cruelty to Puppets."